Senators get thorough briefing on proposed ban of ‘styrofoam’ containers 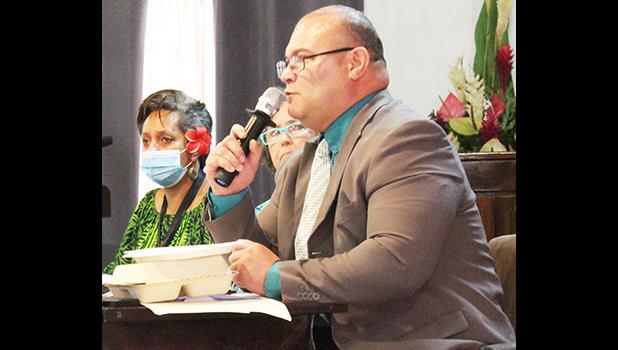 Asalele was speaking at last Thursday’s Senate Hospital/ Public Heath Committee hearing on an Administration bill, which seeks to prohibit the use of polystyrene foam — referred to locally as “styrofoam”, which is actually the brand name — Styrofoam —  used by a company for their polystyrene foam products.

According to the legislation, “Polystyrene foam container” means a food service container that is composed, in whole or in part, of polystyrene foam. This includes, but not limited to: plates, cups, bowls, trays and hinged or lidded containers also known as’ clamshells’.

Samoa News notes that styrofoam cups — widely used for take-out of hot & cold beverages, and clamshell plates — are popular in the territory for take-out food.

During the Senate committee hearing it was repeated several times that this is not the first time that such a bill has been presented for Fono review and approval.

The last time was during the Lolo Administration, and Sen. Magalei Logovi’i explained that the bill was tabled in committee at the time and no final action was taken, as senators requested the AS-EPA director to provide visual samples of the containers that would be banned as well as samples of alternative paper products.

The AS-EPA director, appeared at Thursday’s hearing with samples to share with the committee, the examples of polystyrene foam (styrofoam)  containers to be banned and the alternative paper products.

Additionally, many countries around the world have banned styrofoam containers including those in the Pacific, such as Samoa and New Zealand.

According to the bill’s preamble, more than 1,000 jurisdictions in the U.S have banned or restricted the sale or use of styrofoam containers and packaging materials, and several local businesses and a number of U.S corporations have successfully replaced these containers with alternative cost-competitive products.

As to the reason behind the Administration bill, Asalele told senators that the overall goal is to protect the health of the community. He shared with senators that there are “two chemicals” which are the “main ingredients” in polystyrene foam — benzene and styrene.

And based on research from medical professionals, he told senators that styrofoam has these two ingredients, which are linked to health issues, such as cancer and leukemia.

It was noted during the nearly 50-minute hearing — and also cited in the bill’s preamble — that the general public typically is not warned or aware of any potential hazard from styrene and benzene leach from polystyrene foam containers into food and drinks when heated.

Sen. Tuiagamoa Tavai asked if AS-EPA or any other government agency has data or information on how many people have died as a result of using a polystyrene foam type of container.

Asalele referred the question for a response to Aileen Solaita, who heads the Health Department’s Environmental Health Services and was also a witness at the hearing.

Solaita said that based on research and findings by U.S Centers for Disease Control and Prevention (CDC) and other U.S professionals, there’s a negative impact of styrofoam on people’s health. However, she pointed out there’s no local data, that would point to individual health issues linked to  styrofoam.

At this point, there’s no local data, that shows styrofoam “directly and specifically” causes health issues, including cancer, she said.

But based on off-island research, styrofoam does have benzene and styrene, which are chemicals that do affect health and are linked to cancer. “And these are the findings,” she said, adding that she is speaking from the enforcement side, as there was no doctor as a witness to provide additional testimony.

Sen. Malaepule Saite Moliga, queried the Governor’s chief legal counsel, Juliet Kristi Thaxton asking if the administration has looked into any loss of ASG revenue through the excise tax, over this proposed ban. “Has the Administration looked at the economic impact of this ban?” he asked.

Responding to a question from Sen. Utu Sila Poasa on the price of the alternatives as compare to styrofoam products, the AS-EPA director said alternatives prices are just a little higher.

Asalele said styrofoam is “very cheap” and the reason is that the ingredients used for its manufacture are cheap.

Asalele told senators that this is the only incentive offered in the bill for private sector, especially importers. And he reiterated that the alternative containers are also sold on island and used by businesses such as restaurants.

Sen. Fai’ivae Iuli Godinet called on the AS-EPA to work closely with the private sector, especially importers, making them fully aware of all provisions of this bill, if and when it becomes law.

Asalele said that AS-EPA had conducted an outreach program when an identical bill was submitted by the previous Lolo Administration. The outreach targeted the private sector and the community — including churches and youth groups, as well as the business sector.

He said AS-EPA plans to do the same, if the current legislation is approved by the Fono and enacted into law.

Samoa News points out the impact of styrofoam on global warming seems to not have been discussed at all during the hearing — focusing more or less on its health detriment to people.

Surprising, since polystyrene foam is considered one of the principle litters in the world and its chemicals are known to ‘deplete the ozone’ which is one of the leading causes of global warming.

The Lemanu Administration has stated that one of its leading causes is to stop ‘global warming’ — which affects the Pacific ‘blue’ nations, of which the territory is a part, directly through rising seas, and disappearing fish and coral species through warming waters.

NOTE: The use of the brand name, “Styrofoam” as a generic term is known as a ‘proprietary eponym’ — known words are Kleenex, Chapstick, Velcro, etc.