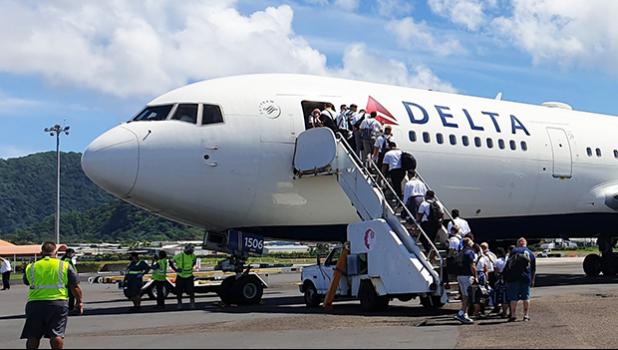 No passengers to Am Samoa allowed, Delta aircraft crew not allowed to overnight
By
Fili Sagapolutele
fili@samoanews.com

Pago Pago, AMERICAN SAMOA — A Delta Air Lines charter aircraft landed yesterday around 11a.m. to pick up the 29 missionaries of the Church of Jesus Christ of Latter Day Saints who have remained on island since the closure of American Samoa’s borders.

Speaking at Sunday’s ASG COVID-19 Task Force meeting Gov. Lolo Matalasi Moliga recalled that his original approval of the evacuation fight was with the condition and promise by the Church that no one on the aircraft, including the crew, would deplane, when the aircraft arrives. The aircraft would park on the tarmac while missionary workers walked out to the plane.

However last week Thursday, Lolo said a change was requested for the flight crew to overnight on island and depart the next day. “So we tried to push back that this is not right,” Lolo said, noting that the flight was to arrive yesterday and the plan stands no one gets off the plane and the crew will not overnight.

Church Elder Vince Haleck worked with local officials on this matter, and Lolo thanked Elder Haleck and ASG officials who negotiated with the airline and others off island for making this become a reality and for the missionaries to be picked up.

He says that if the flight crew were to stay overnight here, it would defeat the whole purpose of current restrictions and protection of American Samoa from the deadly coronavirus.

The governor also said that his office had received calls from families whose relatives are Church missionaries serving in the US wanting to return to the territory on yesterday’s incoming flight. He apologized to affected families that this couldn’t be done with this flight.

Samoa News understands that many of these missionaries wanting to return home are currently in Utah and that’s where the charter flight will return.

Under current travel regulations, all arriving passengers from the US must present a health clearance signed by a verifiable physician that they are clear of the COVID-19. The clearance is presented upon arrival on island. The individuals would also be required to undergo screening by local DoH and subjected to a 14-day quarantine.

Two weeks ago more than 50 Church missionaries in Samoa were evacuated out of Apia on a charter flight, according to regional news report.