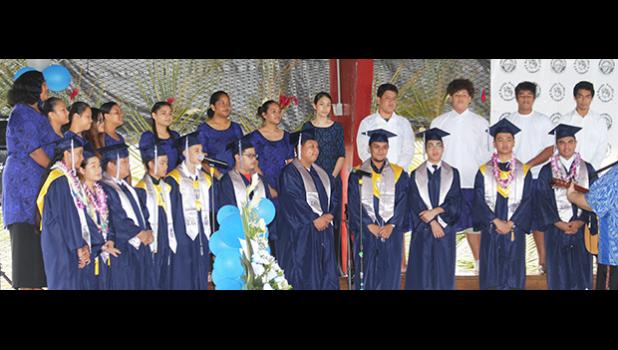 Pago Pago, AMERICAN SAMOA — South Pacific Academy (SPA) bid their final farewell to 12 Dolphins who officially graduated as members of the Class of 2019 two weeks ago, during a ceremony themed “Different Paths Sometimes Lead to the Same Castle.”

This year’s graduation coverage is sponsored by local company Paramount Builders, in the spirit of community service and commitment to education.

In her welcoming remarks, SPA principal Kathy Fitisone said “South Pacific Academy has several quotes that we live by; one is, ‘It takes a village to raise a child’, and more so than ever before, American Samoa needs to ‘step up, step in, and step out — do whatever it takes to make our children succeed. It is not an easy task and it cannot be done by families and schools alone’.”

She added “In order to have successful villages and excellence in education, we must have successful partnerships with our churches, our various communities, and our government — It’s a collaborative effort that involves sacrifice on so many different levels, and therefore we thank you all for being part of our South Pacific Academy village.”

In his message, Lt. Gov. Lemanu told the graduates that for 12+ years, their  parents, friends, school staff, and families have prepared them for this day. “Now after today, after all the parties and celebrations of your achievements, maybe not tomorrow or next week, you’re going to wake up and ask yourselves ‘Now what — Now it’s time to move on’. Then you’re going to have to muster all you have learned in the 12+ years. Muster it physically, mentally, and you have got to take that with you.”

He added, “Take what you have learned from the principal, the schools and the teachers, take what you have learned from your parents, your friends, and you use that as you move forward, because they will be the same supporters you will have for the next 4-8 years. They won’t be there physically with you, but they’ll be there when you call on them.”

SPA history instructor, Samuelu Siilata advised the graduates not to waste time. “You have your life ahead of you, it’s a set amount of days, none of us are guaranteed a full amount of years, so I really urge you as you leave from this place, decide what you want to do and pursue it. Don’t go back and forth, but have the will to find out what it is you’re supposed to do in life. I believe that we have invested in you because we want you to succeed.”

With a cumulative GPA of 3.91, this year’s valedictorian honor went to Jimi Shun Lin, son of Michelle Chen and Chiang Biao Lin.

Not far behind with a cumulative GPA of 3.85 is class Salutatorian, Sophie Malama Young, daughter of Sina and Sala Young.

All 12 graduates were presented a Congressional Award from Congresswoman Aumua Amata.