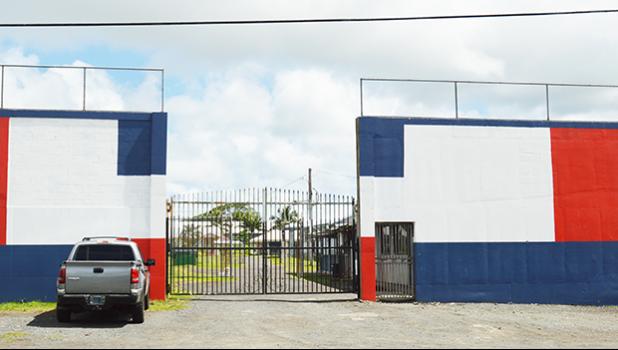 Pago Pago, AMERICAN SAMOA — Drugs entering the Territorial Correctional Facility (TCF) and prisoners having access to drugs has been an ongoing problem in the territory for many years now. Despite building a ‘high’ wall around the facility by the Lolo and Lemanu administration, inmates are still testing positive for methamphetamine (meth) and marijuana, which the court says is a solid sign that drugs are still getting into the facility — despite the high walls now surrounding the facility.

Last Friday, Chief Justice Michael Kruse issued subpoenas for the Deputy Commissioner of Public Safety, Fo’ifua Fo’ifua and Warden, Falana’ipupu Taase Sagapolutele to appear before the High Court this coming Friday to answer questions regarding the problem of drugs allegedly entering the TCF still on the rise and why they can’t maintain the facility (TCF) as a ‘drug free’ compound.

It was during the hearing of inmate, Ronald Pickering that the Court ordered the two top officials of the Department of Public Safety (DPS) to appear in court.

Pickering, who has been in custody since the beginning of this year after being arrested for violating conditions of his probation appeared in Court last Friday for his Disposition Hearing. He was represented by Assistant Public Defender, Ryan Anderson while prosecuting the case was Assistant Attorney General Kristine Soule.

When the case was called, Anderson asked the court to release his client saying that his client has been in compliance with conditions of his probation now for over 5 months remaining drug free during that time.  Anderson suggested to the court that the best option for his client at this time is to release him and continue on with probation.

The court reminded Anderson that the reason the defendant has remained clean for over 5 months now is the fact that he was forced to by the court as he was incarerated. The court told the defendant that his probation would be revoked right now if not for that option the court gave him — to be held in custody for a period of 5 months while parties work to put a treatment plan together with the court to help address his drug problem.

The prosecutor reminded the court that since the defendant was sentenced in 2019, this is his 5th OSC called for violating conditions of his probation after testing positive for meth.

Soule echoed the defense’s submission asking the court not to revoke Pickering’s probation but let him continue on with probation. Soule suggested that the court modify conditions of the defendant’s probation by having him tested 3 times a week.

The court said that the only option is to revoke probation and order the defendant to serve five years at TCF, however, the court is also looking at the problem of illegal drugs in the facility and the chance the defendant would be able to access them. The court also stated that the only reason why the defendant remained clean for 5 months is the fact that he was forced to stay in custody at the temporary holding cell at the Central Police Station in Fagatogo.

When the defendant was given the chance to address the court, Pickering said he appreciated the court’s time and the fact that the court and parties are trying to work out something for his benefit. He said that the 5 months he’s been in custody has taught him that he must do something to address his drug problem. He said he’s now clean and it appears to him that he can make the changes for himself.

According to Pickering, drugs are everywhere, but it’s for him to make the difference in his life. He’s a father and he has a young son to take care of.

He told the court that his concern with being held in the temporary holding cell is the fact that his family is not allowed to visit him nor is he allowed to make any phone calls to his family.

After hearing the defendant’s statement, the court then continued the Disposition Hearing and ordered subpoenas for the TCF Warden and Deputy Commissioner to come and explain to the court why they can’t maintain the TCF as a drug free compound.

The court said that there are a bunch of pending probation violation cases against inmates, who are testing positive for illegal drugs while in jail.

The court stated that the Executive Branch has spent large quantities of taxpayers’ money to build the huge walls around the correctional facility, but the court doesn’t know what the purpose of these walls is.

The court turned to the defendant and explained to him that the court is trying to explore every option to help him with his case, because once the court revokes his probation, there’s nothing more the court can do for him.

Pickering was remanded back to the holding cell to await his next court appearance on Friday at 9a.m.

DRUGS IN THE FACILITY

The issue of drugs entering TCF was also before the court a few months back when two inmates, who tested positive for meth, appeared in Court for Disposition Hearings. They were Sonny Mu Kelemete and Sierra Isaia.

Foifua, who was Warden for many years before he was appointed as one of the two Deputy Commissioners, told the court that one of the problems TCF is facing is the wall at the back side of TCF. He told the court, on the rear side wall, it’s easy for anybody to smuggle anything inside the facility by just throwing it over the wall because it’s too low.

Foifua Jr told the court that there was an incident in the past while he was the Warden at the time, when an unknown person threw a package inside the compound from the big Pulu tree.

It was lucky that the package was thrown into the compound while a TCF guard was stationed at that corner of the compound because it was a box of beer.

Kruse wanted to know how high the rear fence is. According to Foifua Jr, it’s about 6ft. He added that another problem at the back side is that there are rocks on the outside that someone could stand on, making it easier to throw something into the compound.

The front wall is just for show and the rear is not safe, Kruse stated. Foifua Jr said, “Yes.”

Foifua Jr further added that before the fence was built, DPS officials requested the American Samoa Government (ASG), not to focus on the front side of the wall but on the rear area because a lot of illegal activities at TCF happen at the back side of the compound.

The court recommended that TCF use surveillance cameras to monitor the whole compound to prevent this problem of contraband entering the facility from continuing to happen.

Foifua Jr said there were surveillance cameras when the new facility was dedicated a few years back, however, he doesn’t know why the cameras are no longer being used.

In an effort to monitor the safety of the compound and to make sure it’s free from illegal drugs, TCF guards are patrolling the compound every 30 minutes, he said.

The court offered a piece of advice saying that if this has become common knowledge — the time guards are patrolling the compound — people could still throw things into the compound, between the time the guards were not patrolling.

In response, Foifua Jr said they’re aware of the situation and they’re also working on the challenge. He also stated that the Department of Public Safety (DPS) is also requesting assistance from the Tafuna Police Substation (TPS) during the time they patrol the area to make sure they assist the guards on their daily routine checkup.

Kruse reminded Foifua Jr the importance of having cameras in the TCF facility. He told him that as they speak in the courtroom, they’re being watched — referring to the court surveillance camera system that monitors all movements in both the District Court and High Court.

In sentencing of the defendant in August of 2019, Kruse said Pickering’s drug use not only ruined his life, but also the lives of those who depend on him: his wife and child. He said there is no solution for personal use.

According to the court, the defendant was not clean after he was arrested last year. While released on his own recognizance, Pickering tested positive for meth. His $2,000 cash bond was forfeited and a new cash bond of $5,000 was issued.

Pickering was stopped for a seatbelt violation and was taken into custody when he couldn’t produce a valid ID. Kruse said the defendant is not new to the system. Based on court records, Pickering was convicted of a DUI a few years back.

Kruse said Pickering has a drug problem, and the court ordered him to stay clean after he was caught with a glass pipe; but he returned to his normal routine and went back to drugs.