SYEP BEGINS — “You are the Youth for the Future” 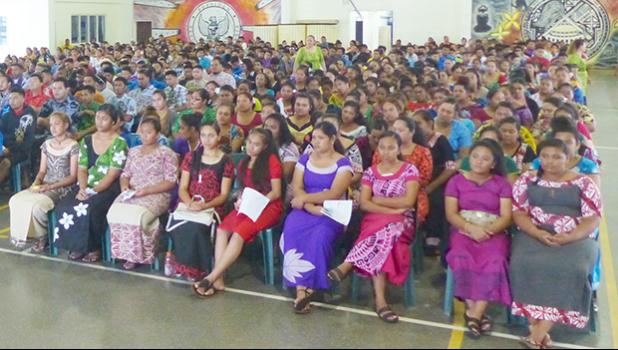 Pago Pago, AMERICAN SAMOA — A look at some of the local students during Monday’s opening ceremony at the DYWA Pago Pago Youth Center for this year’s American Samoa Government-sponsored Summer Youth Employment Program (SYEP) which includes at least 8 who are American Samoan students attending school off island but are home for the summer.

In total, there are 800 students for the SYEP this year, ages 14 to 24 and participants went through the selection process carried out by the Department of Human Resource (DHR). Funds to pay for SYEP participants, who earn minimum wage, come from federal Workforce Innovative Opportunity Act, administered locally by DHR; the Community Services Block Grant, administered by the local Department of Commerce; and the Governor’s Office Special Program funding.

SYEP participants, who work four-hours a day Monday through Friday, will be working for six weeks — ending Aug. 3 — at both government and local businesses, which have offered to take on students as paid “interns”. Samoa News has two interns this year.

The goal of SYEP is to provide student-participants with knowledge and experience in a working environment, to prepare them for their career choices in the future.

During Monday’s opening ceremony, Gov. Lolo Matalasi Moliga told participants to get involved and get themselves used to being in the workplace. He challenged the participants to learn more about the work experience during the summer program.

He encouraged them to use this chance to help their parents and families financially. “Make a contribution to them,” he said noting the importance of first sharing their pay checks with their parents, before deciding to use money to buy ice cream for themselves.

To the participants Lolo said, “You are the Youth for the Future” that the government, families and American Samoa depend on. He urged them to keep forging ahead despite any challenges to ensure a successful future for American Samoa.

SYEP participants will also take part in the Governor’s 2018 Youth Empowerment Summit, with the theme, “Self-Determination and Hope”, set for July 2-3 at Pago Pago Youth Center, with the church service scheduled for 2p.m. Sunday, July 1, at the CCCAS Fagatogo.