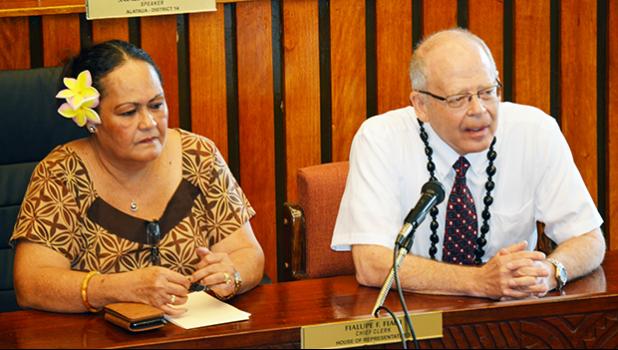 Not quite sure why it’s taking so long… but he thinks it’s because it is gov’t-owned
By
Fili Sagapolutele
fili@samoanews.com

Territorial Bank of American Samoa is still working on getting a transit routing number and the process is taking longer then expected, says TBAS chief executive officer Philip Ware, who suspects that perhaps the reason is that the bank is American Samoa Government owned.

And without a routing number, TBAS customers using the bank’s ATMs are being charged a $3 transaction fee on their TBAS debit cards.

Ware along with TBAS chief operations officer Makerita T. Polu testified yesterday before the House Commerce and Economic Development Committee, which sought information from the government-owned commercial bank on several issues including the status of the bank’s efforts to get Federal Reserve Board approval for a transit routing number.

“We’ve been trying very hard to get federal approval of a transit routing number and we are working on that,” Ware told the committee. “This is generally a two-week process, but for down here, apparently, they (Federal Reserve) are thinking it over. And it’s a lot longer process than we had thought.”

While still working on the routing number, Ware said the bank continues its operations, with checking accounts, which are accessible with the TBAS debit cards, but “we’re unable to issue checks” without the routing number.

Additionally, TBAS has “a few” ATMs operating and it has also starting making loans — both secure and unsecured — and “we’ve begun investing in other loans on island,” he said.

“We have a viable business going right now. We are limited because of the transit routing number, but we’re starting to make some money,” he explained. “We’re certainly not in the black yet, but we’re just starting and I think that we’re doing excellently without the routing number.”

Ware asked for patience, from not only the House, but also the public as they work diligently on getting a routing number and reiterated that the process is taking longer than they thought.

He then told the committee he thinks getting the routing number has become a longer process because, “as I look back as to what it is that the Federal Reserve has a problem with — I think its the government involvement in the bank,” adding that there is only one other bank in the US that is government owned and the Federal Reserve “is very leery of that.”

Ware said, “I try very hard to make sure they [Federal Reserve] understands that there’s a barrier between the government and the bank. And the government will not influence us nor will they get involved with us.”

He told the committee. "So that’s a very big thing in their mind [and] I’m trying to convince them, that is not the case.”

The committee chairman, Rep. Timusa Tini Lam Yuen raised with Ware concerns from TBAS customers, who have to pay the ATM fee of $3 when their TBAS debit cards are used at TBAS’ ATMs to “withdraw their own money.”

Ware responded that without a routing number TBAS had to go to a third party processor, “to process our debit card transactions. At this time, we’re passing that [fee] on to our customers, [as] we don’t have a control on that right now.”

“When we get a transit routing number, than we’re free to do a little bit better with that fee,” Ware said, to which Timusa asked again, so “there will still be a fee” when TBAS gets a routing number “but it won’t be as much as $3?”

“I think we’ll review the situation at that time and do what we need to do,” was Ware’s reply.

A seven-member board of the Territorial Bancorp Holding Company, an ASG entity, governs TBAS.

A bank routing number or routing transit number (RTN) is a nine-digit number used to identify a financial institution in a transaction, with the most common types of transactions being Automatic Clearing House (ACH) and wire transfers.

The ACH — is an electronic network for financial transactions in the United States. ACH processes large volumes of credit and debit transactions in batches. ACH credit transfers include direct deposit, payroll and vendor payments.

For a checking account, it’s the first set of numbers printed on the bottom of your checks, on the left side.