Tropical Cyclone Harold; west of American Samoa — no danger here at this time 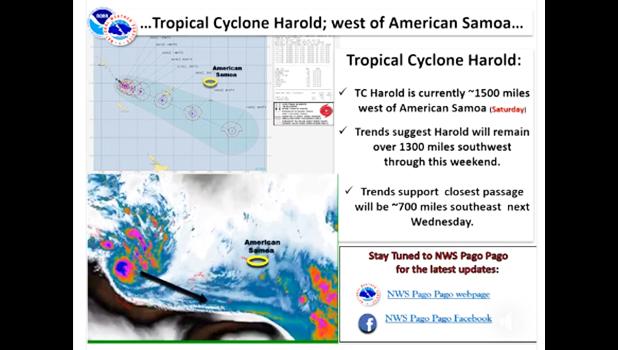 Pago Pago, AMERICAN SAMOA — Tropical Cyclone Harold is currently located around 1500 miles west of American Samoa and is forecast to remain over 1300 miles southwest through this weekend.

Trends support the closest passage of Tropical Cyclone Harold will be around 700 miles to the southwest of American Samoa next Wednesday.

American Samoa can expect scattered to numerous showers with periods of locally heavy rain, and a chance of thunderstorms for the short term forecast. Variable winds will prevail through Monday night before increasing to moderate strengths on Tuesday through Wednesday night, from the north.

Expect passing showers with locally heavy rain with variable winds thereafter through the end of the forecast period.

In the meantime, Cyclone Harold, the most powerful storm in the Pacific in at least two years, has made landfall on the Vanuatu island of Santo, with winds gusting as high as 235km/h.

Cyclone Harold - a category five, the highest possible - has sat just to the west of Vanuatu's central islands for much of the past day, gathering significant strength in the past 12 hours.

On Monday afternoon, just after 1pm, local time, it made landfall on Santo's southwestern coast, and is forecast to continue on a track that takes it very close to Luganville, the country's second-largest town with a population of more than 16,000 people.

Fred Jockley, a managing forecaster at the Vanuatu Meteorological Service, said this storm was the most serious since Cyclone Pam, which destroyed much of the country in 2015, killing few people, but setting livelihoods, infrastructure and the economy back years.

Mr Jockley said Harold was displaying the signs no one wanted to see: it had effectively stalled, moving as slow as two knots, which allows it to suck up moisture from the warm ocean and gain ferocity; it was growing in size, and its force would likely envelop much of Santo and Malekula, Vanuatu's two largest islands; and its current track had it skirting very close to Luganville, the country's second-largest city with more than 16,000 people.

The official number of people in evacuation centres is so far unknown.