TTFAAS thanks govt for “bringing us home” — and bringing hope 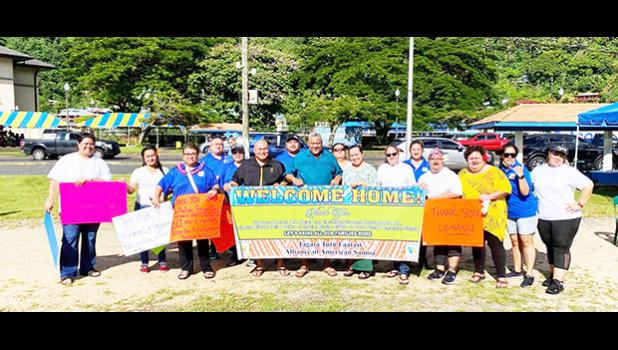 It’s a way to ensure residents still stranded abroad are not forgotten
By
Fili Sagapolutele
fili@samoanews.com

Pago Pago, AMERICAN SAMOA — After being stranded in the US for many months due to border closure, “people lost hope” but the first repatriation flight on Feb. 1st “brings so much, not only to our family here but our people who are stranded, that there is hope, that our governor is bringing us home and our people are welcoming us,” says Feo Lagafuaina, one of the 159 repatriated passengers on that first flight.

“Fa’afetai, Fa’afetai tele lava, to our leaders and our people, in starting... to bring our people home,” Lagafuaina, a member of the group Tagata Tutu Fa’afatasi Alliance of American Samoa said during a Samoa News interview last Friday morning at Su’igaula o le Atuvasa Park in Utulei.

She was joined at Utulei by many of the repatriated passengers, family members and others for the TTFAAS “Thank You Wave”. While participants of the wave held many smaller signs of thanks, a larger banner spells out the message, “THANK YOU GOV & TF FOR REPATRIATING US,” held by supporters along Utulei road, as motorists honked car horns, during the usual busy morning traffic. The “TF” on the banner, refers to the ASG-COVID-19 Task Force.

Lagafuaina explained that the wave is two-fold, saying that the number one purpose is “our way of thanking” Gov. Lemanu Peleti Palepoi Sialega Mauga, Lt. Gov. Talauega Eleasalo Alo, the task force, “our leaders and our people for the opportunity to bring us home.”

“I know it was a hard decision, people were divided on this matter. It took a lot of courage for the governor to make the decision to repatriate our people,” she pointed out.

The second reason for the wave, “it’s our way of making sure that, our Alliance — Tagata Tutu Fa’atasi Alliance of American Samoa — our people, [and] our government do not forget about the hundreds of stranded residents” still in the US wanting to return home, she explained.

“And the Alliance, will continue to do their job, in advocating and providing resources for all our stranded family members, until the last resident, is brought home and reunited with their loved ones, then we will stop,” Lagafuaina explained.

Since the governor hinted during his Jan 3rd, Inauguration Address, about discussions of starting repatriation flights and later announced that the process was moving forward, there were a lot of objections locally over the start of repatriation, at a time when cases and deaths continued to spike throughout the US.

Asked if she was surprised with the governor’s decision to start repatriation amid growing concerns, Lagafuaina responded, “I don’t know if I was surprised... I was just very excited when I heard it was going to happen.”

“I’m so thankful that he made the decision,” she said pointing out that after months and months of waiting, stranded residents were “losing hope”.

“The Governor is a military guy and I’m pretty sure, he’s used to making very hard decisions during very hard times, especially when it means people’s lives are on the line,” she noted.  “So I think that kicked in and he made the decision and now we’re here.”

With more repatriation flights — and the next scheduled for Mar. 10th — the Alliance will continue to help the hundreds of local stranded “until each and everyone returns home,” said Lagafuaina, when asked what the group’s plans are to help residents still stuck across the U.S.

With members in Hawaii and the U.S. mainland, as well as in the territory, “we all communicate on what we do to help stranded residents — whether it be legal help, medical help, mental help — they provide resources,” she explained.

The Alliance is gathering information, through a survey it put out on it’s Facebook page — which has also provide a lot of resource information for the stranded residents — and the ASG Hawaii repatriation team has also put out a survey.

“Will bring all of that information together from the surveys, to help us to see what people need so it can improve services for the next flights,” Lagafuaina said, adding that the Alliance is “here to support the government and give input on what we know, and what is needed by our [stranded] residents.”

She acknowledged that the government is doing their part in the repatriation, such as sending out information to the stranded residents, but “they don’t know what people are actually going through in the place, such as the state of Utah, Washington — all those places. I know there are a number of people asking for mental health professionals.”

Lagafuaina shared what many stranded residents have posted in the messages on the group’s Facebook page and that is, for the government to give residents, who have been approved for repatriation flights, advanced notice.

“We’ve got hundreds of people out there wanting to come home. And we’re asking the government, we’re asking the Health Department to please give advance notice to people who will be on the flight,” she said, noting that there is a lot to do prior to getting to quarantine in Honolulu and this is especially important for those traveling from the US mainland.

“I only had a couple of days before checking into quarantine in Hawaii, to get my stuff done,” she said, and recommended to “at least give our people two-weeks advance notice, that they made the flight and for quarantine.”

There is a lot for the approved repatriation passenger to care of, for example - COVID-19 testing.

“And I wasn’t able to get any of this done, in four or five days. There is a lot to be done before reporting to Honolulu for quarantine, she said, and reiterated to give the approved passengers two weeks advance notice.

Meanwhile, the next group of stranded residents approved for the Mar. 10th flight have already been notified, according to ASG officials and this has been confirmed by some of the residents who posted messages on TTFAAS’ Facebook page.