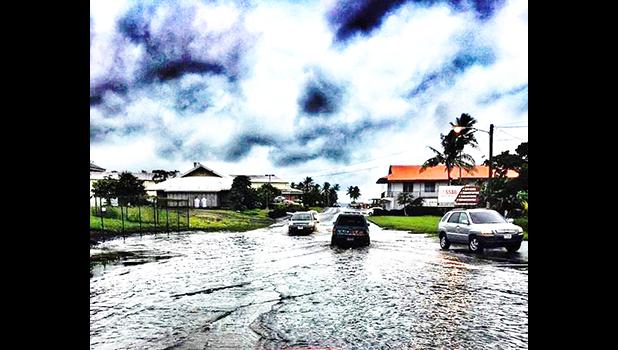 Recent rain is highlighting the need for action
By
Fili Sagapolutele
fili@samoanews.com

The letter requests that the administration “seriously look at the new $479 million” from ARPA for American Samoa “for possible discretionary funding under the infrastructure component to help numerous heavily travelled but deplorable secondary access roads and flooding throughout our county.”

Sanitoa explained that it’s common knowledge by now that the flooding and road conditions in Tualauta County will continue to worsen as the district experiences growth and development.

“It is our belief you are fully informed and aware of the situation, and there is no need to elaborate on the risks our people are facing or stress the urgent nature of achieving progress on these flood control and road construction projects,” he said.

Sanitoa recalled that three months ago, he along with Magalei and Meleisea met with the Public Works Department’s Highway Division engineering team and visited several frequently traveled but unpaved secondary roads and flooding areas throughout the Tualauta county.

He informed the governor that many of these flood areas and deplorable roads have placed tremendous financial hardship on local residents.

“In addition, there is NOW a concern about the amount of drinking water available from aquifers in Tualauta, due to the lack of proper drainage and the surface runoff water,” he said. “The purpose of our site visits with DPW's engineering team was to have many of the drainages and road projects prioritized and identified as shovel ready while we continue to look for funding.”

Sanitoa went on to note that it’s “very encouraging to hear” that U.S President Joe Biden and members of the US Congress are working on an Infrastructure Legislation that will provide a much needed source of funding to address the numerous infrastructure needs of the country — including American Samoa.

“We are certain Congresswoman Uifa'atali Amata Radewagen will see to it, that there will be enough discretionary funding in this important legislation for our territory’s drainages and secondary roads,” he wrote to the governor.

Sanitoa also shared that “we are very happy to hear” that the governor has established an oversight office to specifically look after the more than $470 Million the ARPA. (See Samoa News edition June 25th edition about the new office, headed by executive director Keith Gebauer.)

And this office is similar to the oversight office during the American Recovery and Reinvestment Act (ARRA) in 2009 “which was a good way to ensure monies were spent as required by law.”

“Thank you for your time and we look forward to your most favorable response. We remain optimistic that we will see a workable solution to our county’s infrastructure problem,” the letter concluded.

The letter was also copied to Lt. Gov. Talauega Eleasalo Ale and others.

The Tualauta request to the governor comes days after heavy rain that has caused more flooding and terrible road conditions throughout many areas of the territory — including Tualauta areas, such as Fagaima and Ottoville.