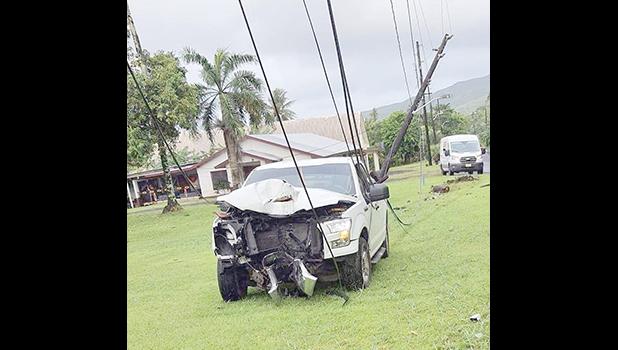 Pago Pago, AMERICAN SAMOA — A vehicle that got into an accident Friday morning caused a power outage from Futiga to Fagamalo villages. At the same time an unrelated power outage affecting the villages of Masefau, Masausi and Sailele

Motorists in the area had reported that the vehicle hit the utility pole and no information was available if anyone was hurt in the accident, but police are investigating.

ASPA said in the Facebook posting with the photo that a vehicle accident around Fa’asao Marist High School area in Lepuapua caused major damage to a primary pole and took out the power for the area.

The accident occurred approximately between 7a.m. and 7:30a.m at the time when the territory was faced with heavy rain and high wind that had been going on since 1a.m. that Friday and some residents suspected that the outage was due to the bad weather conditions. However, ASPA and local residents posted to social media about the car accident.

Around the same time as the vehicle accident, residents on the far east side of Tutuila posted to social media and called into local radio stations about a power outage and suspected it was due to weather conditions.

ASPA posted on its Facebook page that the power outage affecting the villages of Masefau, Masausi and Sailele — far east side of Tutuila was from a tree falling and breaking an electric primary line on the “mafa” in Fagaitua.

Work by ASPA crews to restore power following the two power outages was accomplished, but delayed due to inclement weather that morning.