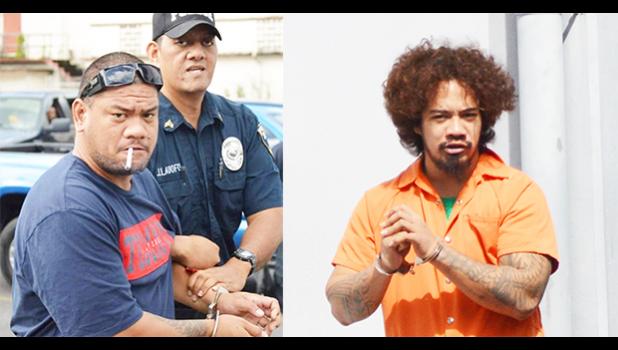 Pago Pago, AMERICAN SAMOA — Two inmates convicted of escape from confinement — a second time — while serving their sentences received a huge break from the High Court last week when Chief Justice Michael Kruse ordered that their new sentences would run concurrently with the detention that they’re already serving.

The court was told by the inmates’ attorney that conditions have changed at the prison since their escape two years ago, when he asked for leniency for his clients.

Vatoi Ching Sam Jr, a.k.a Pati Lepou told the court in 2019 that life at TCF at this time is not easy, compared to the past 5 years where everything was fine and stable.

“In the past 5 years, we were able to eat well and received everything we asked for, but now, the food is not good and we hardly get what we ask for such as soap to shower, tooth paste and food. That’s why inmates escape from confinement,” Lepou told the court.

Lepou is serving a 25-year sentence for escaping from the Territorial Correctional Facility (TCF) in January 2010 and assaulting an ANZ bank security guard.

Joseph Iakopo is serving a 16-year sentence for burglary and stealing, as well as escaping from TCF. He is one of three inmates that told the court during sentencing in 2019 that they escaped to tell their families they were being treated like animals.

Both inmates appeared in High Court last week for Change of Plea hearings. They were represented by Assistant Public Defender Ryan Anderson while prosecuting the case was Assistant Attorney General Kristine Soule.

The court accepted plea agreements from both side, and then decided to go forward with sentencing at the same time, which was also accepted by both parties.

Lepolu, 27, was initially charged with one count of escape from confinement, which was the same offense he pled guilty to, according to his plea agreement with the government, a class D felony, punishable by imprisonment terms of up to five years, a fine of up to $5,000 or both.

Lepou further stated that while he was serving his period of detention, he, along with other fellow inmates decided to leave TCF unauthorized, knowing very well that he was not allowed to leave confinement without order of the court.

For Iakopo, 30, he was initially charged with one count of escape from confinement, the same offense he pled guilty to during his plea agreement with the government, which was also accepted by the court last week.

With his guilty plea, Iakopo admits that on Dec. 21, 2019 he escaped from TCF without authorization from the Warden or order of the court while serving a sentence for several felony charges.

Before the court rendered its decision, the defense attorney asked the court to give his clients another chance to redeem their lives.

He told the court that whatever sentence the court is going to impose, he asked that it run concurrently with the detention his clients are already serving. He said that his clients are truly remorseful for their actions and the conditions at TCF are now very different from how it was two years ago when the offense happened.

The prosecutor did not oppose the defense’s submission and echoed Anderson’s statements for leniency.

The court sentenced Lepou and Iakopo each to a period of imprisonment of 5 years to run concurrently with previous sentences.

“We have no further comment on this,” Chief Justice Michael Kruse concluded.

Lepou’s conviction stemmed from an incident where he, along with three other inmates escaped from confinement in 2019. The three inmates are Elliott Siaumau Jr and his brother, Thomas along with Gabriel Poe Tinae.

According to the goverment’s case, a police detective was called to investigate an alleged escape from TCF during the early morning hours of Oct. 19th. The lead investigator said he interviewed several TCF officers who were on duty during the time of the alleged incident. According to one TCF officer, it was during head count that he realized that five inmates were missing from their cell. All five were housed in Bravo Unit in ‘cellblock #18’.

As TCF officers conducted a search inside the TCF compound around 10:24p.m, they were shocked to see four inmates enter the compound through the main gate. They were: the Siaumau brothers, Tinae, and Lepou. They were all searched for contraband before taken back to their cellblock. Nothing was found on them.

In 2010, Lepou and three other inmates escaped from TCF and walked towards ANZ where Lepou struck the security guard and kicked him while demanding his car keys. Lepou told the other inmates to stab the guard with the butter knife he was holding.

Lepou and the crew continued to attack the security guard until they saw a truck approaching; that’s when they fled and returned to TCF.

All four inmates were found after three days. They told officers that there was a bad situation inside TCF including not enough food and that was the reason behind their decision to escape.

Iakopo was 22 year old when he was arrested in 2013 as the main suspect in a string of 13 burglaries over a period of 4 months in the Tafuna area. Iakopo is a high school dropout who told police at the time that the reason he burglarized several stores was because he needed money.

He was sentenced to 15 years behind bars after being convicted of 1st degree burglary, a case B felony, punishable by a term of imprisonment of 16 years, a fine of up to $5,000 or both.

The robbery spree Iakopo was involved in included several businesses and homes, including the home of a church minister. The government stated that the robberies covered about six villages on the west coast.

Iakopo stole more than $3,000 from a church safe, which was at the home of a church minister, and more than $2,000 worth of merchandise from stores, two restaurants and private homes.