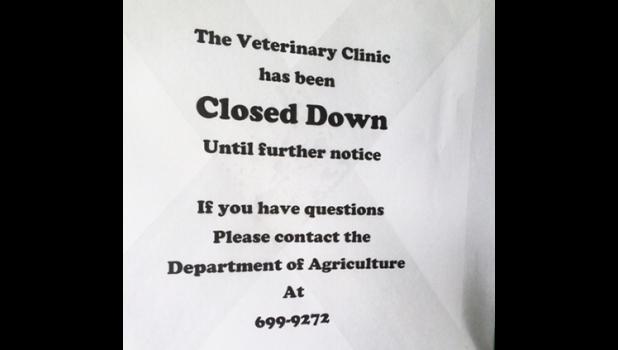 The Department of Agriculture (DOA) Veterinary Clinic reopened Monday morning, on orders from Lt. Governor Lemanu Peleti Mauga, who paid a surprise visit to the Vet Clinic yesterday, following concerns by the public that it was boarded up last week and closed down by Director of DOA, Lealao Mel Purcell.

Samoa News over the weekend received calls and emails along with photos from members of the public who were unhappy that DOA had closed down the only Vet Clinic on island.

“Where am I going to take my babies (kittens) if they get sick from now on,” was one question posed about the closing down of the clinic.

Emails and calls to employees of the Clinic were referred to DOA Deputy Director, Peter Gurr who said that the “shut down of the vet clinic” was not based on instructions from him.

(Samoa News understands it was under Gurr’s directions that the clinic building was ‘boarded up’, per instructions from the DOA director.)

According to the notice slapped at the top middle of the door with wood planks boarding the door “the Veterinary Clinic has been closed down (in bold letters) until further notice.” The notice referred any questions to the DOA.

According to Vet Clinic employees, they were ordered to put down the stray dogs that allegedly attacked chickens on the DOA compound, however the employees refused to do so.

The Vet Clinic was abruptly boarded up last week Friday. “Stray dogs killed over 100 chickens at the DOA compound,” says Deputy Director, Pete Gurr, who did not say this was the reason the Director of DOA moved to close down the Veterinary Clinic — Until Further Notice. [courtesy photo]

Responding to Samoa News queries, as to what prompted the move to close down the clinic as per the notice on the door, Gurr did not say it was due to the killing of chickens by stray dogs, but he did confirm that stray dogs at the Vet Clinic had killed chickens at the DOA compound.

DOA employees told Samoa News that this was main reason behind the closing down of the clinic.

Gurr told Samoa News, “Yes, it is true that the stray dogs killed over 100 chickens at the DOA compound. The chickens were being used as trials for meat and egg production. This was the second time the dogs ripped up the fence to get inside the chicken coop.

“It was a tragic sight seeing the slaughter of the chickens by these stray dogs,” Gurr said.

He also made it clear that this was only a temporary closure of the Vet Clinic. The public will be notified when it is reopened, Gurr said.

However according to employees of the Vet Clinic who did not wish to be named, they were asked by the Deputy Director to render their resignations.

Emails and questions posed to the DOA Director were not answered as of press time.

“I'm pleased to report the veterinary clinic is back open.” According to a DOA employee the Lt. Governor visited the clinic and ordered the DOA to reopen the clinic. The employee further said that Lemanu pointed out that the government leaders were not made aware that DOA had moved to close down the Vet Clinic, and it was done without notification to governor’s office.