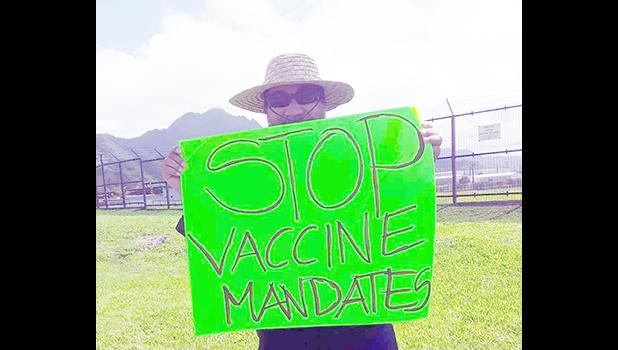 Pago Pago, AMERICAN SAMOA — A local Non-Profit Organization group called, “Amerika Samoa Ala Mai” (ASAM) is calling out to government leaders to slow down with their plans for a vaccine mandate and give the community the opportunity to get answers to the many questions they’re asking, before making the decision whether to get the COVID-19 vaccine or not.

To get their message to the community loud and clear, ASAM held a peaceful rally this past Saturday in the Tafuna area with the message “stop the vaccine mandates” written on their posters and banners.

During their Facebook live discussion, some members stated that this is a good time for ASG leaders to explain to members of the community the side effects of these vaccines and who would be liable if someone dies from the vaccine.

ASAM members during their discussion stated that they conducted their own investigation by interviewing members of the community and it appears that there are many people who don’t understand the effects of the vaccine.

“There are people who strongly oppose the shots but are afraid to speak out due to the fact that they might face consequences if they don’t comply,” the group said adding that the Immigration Office is not renewing immigration IDs if the applicant can’t show proof they are vaccinated.

“We did our research and we found out that this is the right time to let our message out because our people don’t understand what’s inside these vaccines.”

Additionally, ASAM believe the mandates are unconstitutional and the American Samoa Government (ASG) is violating and infringing on residents’ inalienable rights.

“We demand a statement from the Attorney General on record to tell us that the mandates are not violating the Nuremberg Code and our human rights. We demand an explanation from the health experts to explain why a lot of people are dying as a result of taking the COVID vaccine. The people need to know what’s really in the vaccine and the ingredients contained [in the shot],” an ASAM spokesperson told Samoa News.

The group also called out to Fono leaders to conduct public hearings to allow health experts to explain to the people the effects of the vaccine.

Giving out $100 cash incentive to people for taking the shot is not the right move, according to the group.

They believe that the government is buying peoples’ lives by giving out the $100 incentive to encourage people to take the vaccine.

According to the spokesperson, this group was established a few years ago before the COVID pandemic with the mission of educating our local community on issues pertaining to our wellbeing. It is to educate them so they are well informed about the issues so they can make better decisions — especially when it comes to electing their political leaders.

Last week, the American Samoa COVID-19 Task Force announced the American Samoa’s COVID Mass Vaccination is now being planned for the first three Wednesdays of December and the primary targets are the schools and villages.

ASG and the private sector will not shutdown as originally planned, and the majority of the vaccine sites will be at schools and church halls in areas that village mayors have identified would be easily accessible by residents.

The newly adjusted dates for the mass vaccination drive are:

A $100 cash incentive will be available for each person getting the shot during the territory’s Mass Vaccination program but the only ones eligible are those getting the first or 2nd shots.

Those getting the booster shots and ASG employees are not eligible. The new plan was revealed during the meeting of the COVID Task Force and takes into account concerns raised by the private sector and input from Task Force members — particularly the Department of Education, Office of Samoan Affairs and lawmakers.

“What we’re going to do is… hit the schools week by week. Invite parents to the schools, have them come in and sign [their child’s] consent form there and be with their child when the child gets the vaccine,” said Dr. Amoa. “We want to tackle the schools before they break for the holidays.”

In the meantime, the Covid Task Force is reporting 5 new border cases from the latest flight from Honolulu. See story in this issue for details.