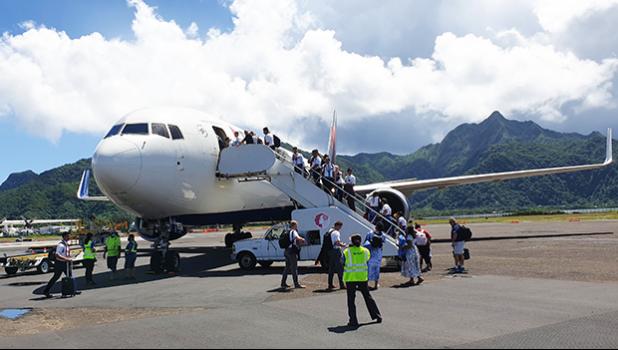 Other Pacific countries are doing this, including Samoa they say
By
Fili Sagapolutele
fili@samoanews.com

Pago Pago, AMERICAN SAMOA — With American Samoa’s borders closed for about two-months now due to the coronavirus pandemic declaration, questions have been raised as to why ASG can’t charter a flight to uplift stranded local residents in the US to bring them home and that same flight could take those who are stranded on island, back to the U.S.

For more than a week Samoa News has received the same inquiry from readers in American Samoa and those in the U.S. especially in Hawai’i, where several local residents have been stranded since Hawaiian Airlines flights between Honolulu and Pago Pago were suspended on the last week of March.

These inquiries come at a time when governments of other Pacific nations have chartered flights to bring back home their citizens stranded around the world, including those in the U.S.

“Why can’t ASG charter a flight of Hawaiian Air to bring all our people stranded in Hawaii and at the same time have the people stranded here and our sick patients at LBJ Medical Center needing medical attention be on the flight returning to Hawaii?” is the main question from local and off-island readers, who specifically sought a response from the ASG COVID-19 Task Force and its chairman, Iulogologo Joseph Pereira.

Samoa News has learned that there are several people from the U.S. who have been stranded here since the borders were closed — two of the travelers who arrived the last week of February are hopeful to return back to the mainland “soon”.

“First off, ASG doesn't have the money to charter a plane. Second, we don't want to run the risk of having a confirmed case,” was Iulogologo’s response yesterday when asked for comments.

“The Governor is very sensitive and sympathetic with the plight of our residents stranded in the United States and elsewhere but the lives of the 60,000 living on island take precedence over them,” he said.

“I truly am sorry for saying that — but these are the realities which we are living with daily,” he said, and asked about readers who inquired with Samoa News, “I wonder how many of them have taken the initiative to be COVID-19 tested?”

“We are concerned with our people who are here needing medical treatment and the Governor is carefully monitoring the situation and we are not going to charter a Hawaiian Airlines flight to take them as it is not cost effective,” he said.

Samoa News readers pointed out that all those returning home — from the U.S. on a charter flight — must be quarantined by the task force, and make sure they don’t leave until health officials are satisfied that they are not a threat to others.

Asked for comments on this statement, Iulogologo replied, “We are not going to take the risk for an asymptomatic patient to enter the territory and start infecting our people.” He points out that “health experts have verified the fact that a person can carry and spread the COVID-19 virus without exhibiting any symptoms and we currently don't have sufficient test kits to test everyone coming down.”

He points out that Hawaiian Airlines carries 276 passengers in one flight “thus we don't have the quarantine facilities to quarantine everyone. We no longer allow home quarantine because it just doesn't work as shown already by our people’s refusal to abide by the quarantine protocol rules.”

Samoa News readers also asked, “if it’s the limited testing-kits that is the concern, why not order more … since we now have millions in COVID-19 funding?”

Iulogologo replied, “It is easy for them to say order more when the States of the Union themselves can't access enough test-kits to test everyone. We currently have just over 2,000 test kits on island and we are reserving half in case we have a confirmed case triggering an outbreak. It also costs money.”

He explained that federal funds received by ASG “have terms and conditions which preclude us from spending these funds for things not allowed under this federal aid. There are just not enough test-kits to go around.”

“The fact that we don't have a confirmed case places us at the bottom end of the totem pole,” he said, and noted that the governor has instructed Health Department and LBJ to look at South Korea to purchase test kits for American Samoa.

“Our current entry protocol requires any traveler to American Samoa to get a COVID-19 test 72 hours before boarding the plane if a negative result is yielded,” he said. “So even if there is a flight coming down, all of them must get tested before being allowed to board any flight to American Samoa.”

Samoa News notes that there are also local residents stranded in Samoa and in New Zealand hoping to return home soon.

The current 4th extended declaration lapses on June 1st and physicians with DoH, LBJ and the local federal VA Clinic have recommended to extend border closure until June 30th.

The governor has already appointed a new committee to come up with recommendations for the next step to take when the current emergency declaration expires. (See Samoa News edition May 20th for details.)