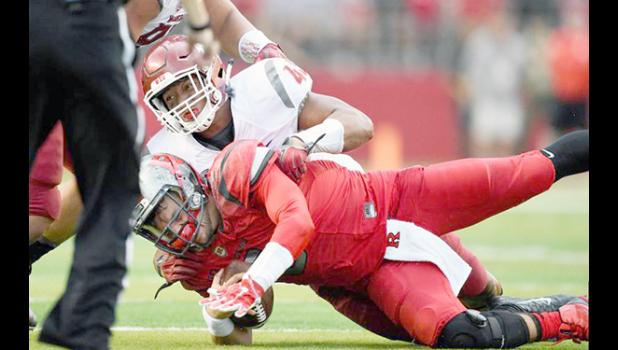 Sad news for American Samoa today, former Samoana Sharks all-purpose player Logan Tago, was reported by The Seattle Times – as arrested on Monday, on suspicion of a felony robbery and second degree assault that occurred on June 4, 2016. According to The Seattle Times, they’ve confirmed this as of Tuesday morning.

Samoa News notes there are doubts being cast on the arrest accusing the police of a double standard, where there is focus on one demographic, one group of people — some call this racial profiling. The charges against Tago come on the heels of multiple allegations against other members of the WSU football team, for possibly similar reasons.

According to the Seattle Times story, Tago was allegedly one of a group of men who mugged another man around California Street in Pullman – they demanded that the man give them the pack of beer he was carrying. Sources reported the victim refused and his assailants allegedly assaulted him and stole his beer – the victim was able to identify Tago.

Pullman Radio reported that Pullman Police have identified several other persons of interest, but Tago is the only person who has been arrested in relation to this incident.

Tago is listed as a co-starter on the Cougars depth chart at the rush linebacker position. Now at 6’3 and 235lbs and only a sophomore, Tago has shined throughout their preparations leading up to being a starter in their season opener against EWU and saw extensive time in their showdown against Boise State last weekend.

He is a Samoana High School graduate, class of 2014 – and he was the big man not only on campus at SHS, but on the football field for the Sharks football program as well. During his time competing at the high school level, Tago was known to be a ‘unique’ player.

Samoa News reached Pasefika International Sports Alliance (PISA) representative, Keiki Misipeka – who played a major role in connecting Tago with his current university, to ask about the incident. Tago was one of the best out of American Samoa recruited under the PISA program.

Misipeka said, “On behalf of Pasefika International Sports Alliance representatives Keiki Misipeka and Rachel Jennings: Anyone who truly knows Logan immediately questioned the recent charges brought against him. This is especially as the alleged incident occurred many months ago.”

He added, “If Logan was obviously involved in this incident, then why was he not charged after the event happened instead of months later? Logan’s charges come on the heels of multiple allegations against other members of the WSU football team for similar reasons. However, none of the other people involved in these events are identified or named.”

Misipeka said that in regards to the recent allegations, Washington State University’s Football Head Coach Mike Leach has said, ‘Unidentified males nor any elaboration on their roles in these events — and clearly if these things happened, their role is extensive. If the other guilty parties are not accused or charged, there needs to be an extensive investigation as to why.”

The PISA rep said, “How in the world can only football players be guilty in events depicted like this? It is irresponsible to this town, to this community, and everybody to have some kind of a double standard where we only focus on one demographic, one group of people, and then we drag their name through the newspaper with a bunch of irresponsible comments.

“We can’t allow the double standard because of all these inconsistencies. All I’m left with is to presume them innocent until proven guilty, which is what I should have done in the first place – if Logan, or any other student-athlete were to truly commit a crime that could smear the name and reputation of the university, they would be suspended from the team, lose their scholarship, and/or be expelled from the university.”

The Seattle Times reported that Tago’s arrest marks the third such incident of WSU football players, allegedly involved in assault cases this summer. Pullman Police have recommended that starting free safety Shalom Luani – former Faga’itua Vikings, be charged for second-degree assault for allegedly breaking a man’s nose in an altercation that occurred in August outside a pizza joint.

As of right now, Misipeka told Samoa News that Tago is still enrolled at Washington State University and “attending classes and football practice and will be participating in this weekend’s game against the University of Idaho.”

He concluded, “Therefore, we at PISA will continue to do what we have always done for the student-athletes we’ve helped throughout the years, which is support them in any way that we can. We will continue to lift Logan and his family in prayer as they go through this difficult time.”

Tago was one of the top prospects out of American Samoa that was recruited straight from the island – into a Division I college, and has already made an impact in the Pac-12 league.

Samoa News recalls Tago being a huge star out of SHS not only in his senior year, but way before. Logan shined from the AYFS level, helping the AYFS Bengals to an undefeated championship season. Then carrying the Marist Crusaders to their first ever championship game against the Warriors in his freshmen year at Fa’asao Marist High School.

Transferring to Samoana High School in his Sophomore year, Tago not only led the Sharks in the most touchdowns scored that year within their JV depth chart – he was also pulled up to the varsity level halfway through the divisional competition, and started at the wide receiver position.

As the season progressed in his sophomore year, Tago was also utilized in various positions, and even had a taste of playing linebacker, right next to his older brother, Jamie Tago, who was Samoana High Schoo’ls all-purpose player at the time – Jamie was a Senior then and was the overall team captain.

During Tago’s last year at the Home of the Sharks, he led Samoana to the title game of the year (where they lost to Tafuna), their first appearance in a championship game since their one point win against the Warriors in ASHSAA’s championship title game back in 2009, where they won by a field goal that was kicked by BJ Misi of Faga’alu.

After the regular season, he was highly selected to the American Samoa All-Star Team – at the same time, he was highly hawk-eyed by the recruiters and coaches from the US.