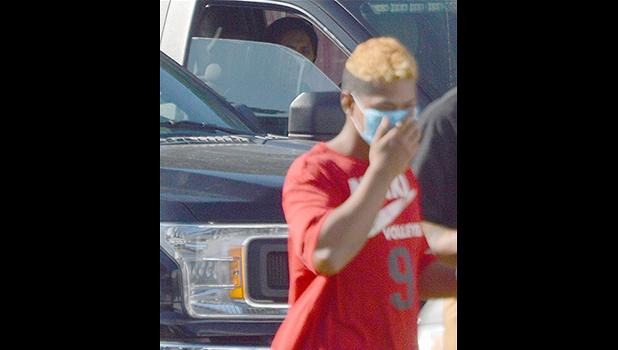 Members of Vietnamese community gathered in support of their lost ‘brother’
By
Ausage Fausia
ausage@samoanews.com

Pago Pago, AMERICAN SAMOA — A 19-year-old male accused of murder made his initial appearance in District Court yesterday morning before Judge Gwen Tauiliili-Langkilde after he was arrested by armed CID detectives last week.

Lomitusi Luapene was transported from the Territorial Correctional Facility (TCF) yesterday morning by the TCF Van, along with twelve other people who are charged with various crimes ranging from misdemeanors up to felonies.

Luapene’s right hand was cuffed while his left hand was free while making his way into the court room.

He was seen talking to other detainees while awaiting his case to be called.

When his case was called, he walked to the front and sat next to his defense attorney, Public Defender, Michael White.

Luapene is charged with a single count of 2nd degree murder, a felony, punishable by a life sentence, or an imprisonment term of 10- 30 years.

Due to the seriousness of the allegation, Luapene is being held without bail and he’s scheduled to appear in court tomorrow morning, Thursday, Oct. 14th at 8:30 for his preliminary examination (PX).

It was around 8a.m yesterday morning when a large group from the Vietnamese community turned out at the District Court to show their support for their friend who lost his life.

Some members of the Vietnamese Community appeared at the District Court building early yesterday morning wanting to enter the court building to witness the initial appearance of the 19-year-old suspect, who was arrested in connection with the case where the body of a Vietnamese man was found dead at an abandoned house in Vaitogi last week. Due to COVID-19 restrictions, their request was denied by the Marshal. [photo by AF]

There were many different reactions to what happened to their friend. Some were grieving while others were very disappointed and angry at what had happened.

A Vietnamese woman told Samoa News that their whole Vietnamese Community is very disappointed for what happened to their friend.

“We are very mad at this time because of the way our brother was treated,” the woman said.

“Our brother was treated like an animal and that makes us angry. We are not animals— we’re human beings like all other different nationalities here in American Samoa.”

Another woman came forward and told Samoa News that “the brother” who lost his life last week was a loving man who worked hard for his family and friends.

“He’s not here with us,” the woman said with tears in her eyes.

“He was murdered in a brutal way by an angry young boy who wanted to steal money from him and accused him of something he never did.”

One of them said that they are very saddened to hear the news about their friend.

“At first I didn’t believe it because I saw him at church on Sunday, but when I found out that the news is true, I cried because I love him,” one of the victim’s friends said.

The large group of Vietnamese was gathered in front of the Tedi of Samoa building while awaiting the outcome of the court hearing for the young man accused of murdering their friend.

Around 10:30 yesterday morning, two police officers turned out at the area where the group were gathered and told them to leave the area.

For the safety of everyone who turned out yesterday morning to witness the initial appearance in District Court of the young man accused of the murder last week of a Vietnamese man, officers are seen in this photo instructing a large group of Vietnamese people to leave the area where they were gathering in front of the Tedi of Samoa building. An estimated crowd of 50 people from the Vietnamese community turned out yesterday morning to show support for their friend whose life was taken. [photo by AF]

The officer told Samoa News that they’re very concerned over the safety of everyone because they’re not sure what is on the minds of these people.

A man who acted as a leader of the group told officers that they’re gathering there to show their support for their friend and to see the outcome of the case. A few moments later, the group left the area.

A Vietnamese man standing in front of the Tedi of Samoa building in Fagatogo, looks across the road while Territorial Correctional Facility guards escort the 19-year-old suspect in the murder  case of a Vietnamese man who was found dead at an abandoned house in Vaitogi last week. [photo by AF]