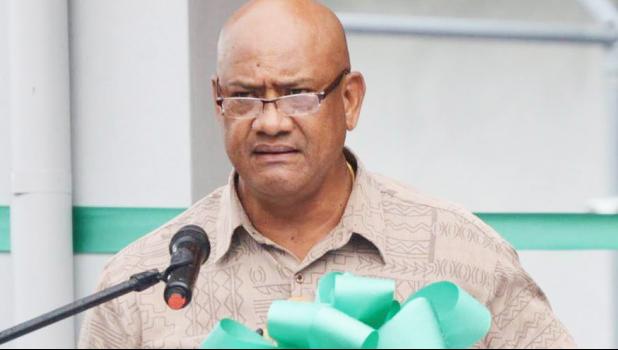 Pago Pago, AMERICAN SAMOA — Nearly 20 citizens of Samoa are still in jail, even though they have already served their period of detention, awaiting deportation pursuant to court orders. These inmates are still stuck inside the Territorial Correctional Facility (TFC) because American Samoa’s borders are closed due to the COVID-19 pandemic.

Some of them have family in American Samoa including wives and children, but due to a condition of their probation that they must depart the territory and remain outside of its borders during their probation, they have been kept in jail awaiting departure.

Last week, Acting Police Commissioner, Commander Fo’ifua Fo’ifua Jr appealed to the Governor for assistance in scheduling flights so that these men can return to their families in Samoa.

During an interview with Samoa News Fo’ifua said that there are a lot of problems they’re facing while trying their best to find solutions to the problem of inmates stuck in TCF.

“Some of these inmates had already served their detention more than a year ago but due to the fact that flights between the two Samoas are suspended as a requirement of the COVID-19 pandemic, things are getting worse because these inmates need to get out of jail,” Fo’ifua said adding that the government is now responsible for feeding these people using taxpayers’ money.

According to Fo’ifua, “The Samoa Consulate Office was very helpful as we’re trying to offer assistance to these inmates who do not have travel documents to return to Samoa.

“All we do is to provide all the paperwork needed for each of the inmates to the Samoa Consulate Office and they do the rest,” he said, adding that, “There were difficulties in dealing with the Samoa Consulate office in the past few years when it came to expired travel document for inmates from Samoa that needed to return back home, but during these times, the office has been very helpful and we so thankful for that.”

According to Fo’ifua, the only people they’re having problems with right now are the local sponsors of the inmates.

“We’re having a hard time trying to track down sponsors of some of the inmates to come forward and fulfill their responsibility under the Immigration Law by providing and being responsible for all the expenses of these people,” Fo’ifua said.

“When we contacted them, some sponsors informed us that these inmates are no longer under their sponsorship and care while others stated that they don’t want to help due to some disagreement with the inmates in the past before these people were arrested and convicted,” Fo’ifua said.

Lemanu said that Fo’ifua’s years of service with the Department of Public Safety has well prepared him to lead the department.

Fo’ifua is one of the longest serving officers of DPS and was Chief of Police during the tenure of Le’i Sonny Thompson as Commissioner. He was a long-time warden of the TCF.

(Of the appointed commissioner, Lefiti Pese, he is a paramount chief from Ta’u, Manu’a and was an associate judge of the High Court and was later appointed as liaison for the Governor’s Office in Manu’a after he left the bench.

Two former TCF guards and one former inmate told Samoa News that Fo’ifua was a kind Warden who always wanted to help an inmate whenever it was needed.

Last year, District Court Acting Associate Justice, Elvis P. Patea did not mince words when he lashed out at what he described as the "government being chugged around" by the local office of the Samoa Consulate.

The remarks were made during a status hearing for Valentino Sam Chong a.k.a. Filipo Soane who pled guilty to public peace disturbance earlier last year and was subsequently sentenced to 24 months probation, under the condition that he depart the territory immediately and not return at any time during his probation term.

Patea noted that Sam Chong's Immigration ID expired in June 2016 and he entered the territory on a 14-day permit. The judge also said that to his understanding, Sam Chong's sponsor had passed away.

During sentencing, Patea had ordered Immigration to get Sam Chong's travel documents and fare squared away, so he can be en route to Samoa sooner than later.

Fast forward several weeks later, and there was still no update on Sam Chong's travel documents. The court was informed by the government’s attorney that the holdup had to do with the local office of the Samoa Consulate."

When asked about Sam Chong's passport — the one he used when he entered the territory — the court was told that the passport is still valid.

Samoa News understands that Sam Chong's passport and other documents, including the court's judgment and sentence, were all presented to the Samoa Consulate Office in Fagatogo.

"How do they refuse?" Judge Patea asked. "This is their citizen!"

He told the prosecutor to speak to the Attorney General "if you need to", and "bring the Chief Immigration Officer" in, if necessary. "If you need to involve the Governor's Office, do it." Judge Patea said the government should prepare Sam Chong's documents, and whatever paperwork involved and they should have Sam Chong's passport — which is still valid — attached to it.

"I'm not going to let him win by default because the Samoa Consulate is dragging its feet," Judge Patea said.