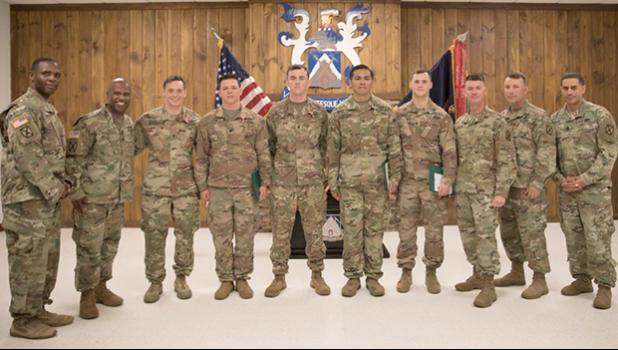 “We were doing some clearance operations through some compounds in Afghanistan,” said 1st Lt. Tyler Wojtasinski, a platoon leader for 1st Battalion, 87th Infantry Regiment. “Once the elements reached their limits toward the end of the compounds, there was a field. Once we were going though the field, that’s when we started to take indirect fire.”

Soldiers in the military often deploy to many countries around the world. Many find themselves in places where combat is a far off thought, and the day-to-day mission they are tasked with doesn’t come close to dangerous.

For Soldiers like Wojtasinski, Spc. Brad Cook and Spc. Miles L. Shoemaker, and Aetonu, from 1st Battalion, 87th Infantry Regiment, 10th Mountain Division, that danger ambushed them during their most recent deployment to Afghanistan on Oct. 26, 2017.

“When we reached the edge of the buildings, our whole element started taking fire,” said Shoemaker, a team leader for 1st Battalion, 87th Infantry Regiment. “The sky erupted in fire.”

Three elements of Soldiers were moving through the territory when they were ambushed by roughly 30 Taliban forces, who were using rocket propelled grenades, mortars and machine gun fire.

“The sky lit up with fire, and it didn’t really seem real at the time,” said Cook, a machine gunner with 1st Battalion, 87th Infantry Regiment. “But, everything kind of clicked. All the training that we had, everything built up to that moment, and we reacted.”

“First thing that went through my mind, I was a little scared,” said Aetonu, who is a Pomu Pomu, American Samoa, native and has been in the Army for eight years. “But, I wasn’t scared of the Taliban. I was more scared for my Soldiers’ safety. As soon as I got accountability of my guys, I knew I needed to get them into the fight. So, that’s exactly what we did.”

Once the fighting started, the Soldiers knew that they had to get back to a safer position to fight off the insurgents. Wojtasinski got the call that one of the other platoons in the firefight took some casualties. The orders came over the radio to fall back to the compounds.

“We bounded back because we were in an open field. We took over a small compound. We got perimeter firing going and dudes on the roof,” said Cook.

The Soldiers had an idea that the Taliban was in the area, but once the shots started to ring out, some of the Afghan Soldiers abandoned their post, that’s when the Soldiers knew that they had to get their guns into the fight to stop the quickly encroaching enemy.

Shoemaker and Aetonu identified a rooftop where they would have the best vantage point to engage the Taliban fighters.

“One of the Afghan Soldiers had abandoned his machine gun,” said Shoemaker, who is a Great Mills, Maryland, native. “I grabbed his machine gun and took it to the roof with a couple of other service members and that’s when we came in direct contact with the enemy.”

“About three to four Taliban were maneuvering in the woodline, and we stopped their advancement toward our position,” said Aetonu. “As soon as the Taliban hear that machine gun, they know we mean business.”

“We had bullets flying over our heads every second,” said Shoemaker. “You could hear them snap, wizz and pop. We got as low as we could and just got our guns in the fight and tried not to get shot.”

Elsewhere on the battlefield, Wojtasinski saw some Taliban fighters who were trying to flank the safer positions his Soldiers had taken.

“Me and one of my teammates started engaging one of the machine gun positions,” said Wojtasinski, who is from Braintree, Massachusetts. “We continued to engage: went through about seven magazines, and a Taliban fighter got to within 25 meters of us. And that’s when my partner threw a hand grenade.”

After the immediate threat of the Taliban fighter had been dealt with, Wojtasinski and his teammate bounded back to the the Soldiers in the compound, got accountability of his element and checked on the casualties.

In the same firefight, an Afghan National Army Soldier was injured by an improvised explosive device, and Cook, who is a Manhattan, Kansas, native, jumped into action.

“We got notified that there was a casualty, so me and the medic I was attached to went out there,” said Cook.

In the moment, Cook thought more about the foreign national who had been injured than his own safety.

“We got the casualty back in the compound, and he was in pretty bad shape,” said Cook. “We gave life saving treatment as best we could on the ground.”

Reflecting back on that moment, Cook had an idea why he put his life on the line for someone else.

“I went out there because, it doesn’t matter what uniform you’re wearing or where you’re from, we were out there in the same fight, and I would expect that from everybody out there,” Cook said.

While Cook rendered aid, Wojtasinski joined Shoemaker and Aetonu who were already engaging the Taliban from the roof.

“I think that was the turning point for us being pinched by fire by the Taliban,” said Aetonu. “Once we were on that roof, everybody heard it and knew that it was a machine gun. That alone stopped their advancement and bought us more time to think about our next step.”

Wojtasinski, Aetonu and Shoemaker continued to engage Taliban fighters who were trying to get around, and trying to flank their position until attack planes arrived. Once the jets came in, they repeatedly attacked the insurgents with machine guns and bombs. After that, the fight was over.

Due to the decisive actions and dedication of Soldiers who put their life on the line for the sake of others, an ambush attack by the Taliban was thwarted. Even though Aetonu, Cook, Shoemaker and Wojtasinski went above and beyond.

For their actions, Wojtasinski, Cook and Shoemaker were awarded the Bronze Star with Valor and Aetonu was awarded with the Army Commendation Medal with Valor by Brig. Gen. Patrick Donohoe during a ceremony on Fort Drum, New York, June 14.

“Our actions on that rooftop, absolutely stopped and slowed down the enemy,” said Shoemaker. “They were very quickly advancing toward our position with heavy fire. We grabbed one of the machine guns that wasn’t being used. We got on that roof, and we did our job.”