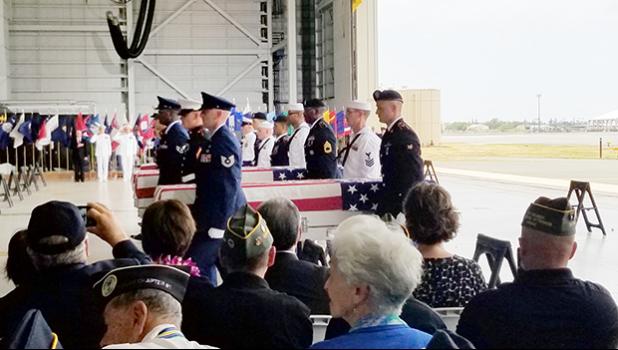 “This was a solemn occasion, but it is a welcome development that these soldiers are at last going home to families and descendants,” said Amata. “It was incredibly moving to observe these military honors. These soldiers sacrificed their lives in their youth or prime of life in service to our country and the cause of freedom, and we owe them a great debt.”

The American Samoan tradition of service in the U.S. military has only grown since the time of the war in Korea, where dozens of American Samoans served at the time.

Aetonu Litisoni is the only confirmed American Samoan fatality on official records for the Korean War, and several more Samoans were wounded. Sergeant Litisoni led a unit in battle honorably and fortunately his remains were recovered at the time. Today, the people of American Samoa enlist at high rates, and the Army recruiting station in our Territory ranks first in the nation in per capita enlistment.

“We pray these repatriated remains will bring additional healing to these families and be an important and lasting reminder of the sacrifice so many have made,” continued Congresswoman Amata. “At the end of the Korean War, President Eisenhower turned to the words of President Lincoln, As President Lincoln said, ‘with malice toward none, with charity for all, with firmness in the right as God gives us to see the light’ we should do all to achieve a just and lasting peace among all nations.’”

Amata was honored to spend time with Korean War veterans there to observe the Ceremony at Hickam. [courtesy photo]