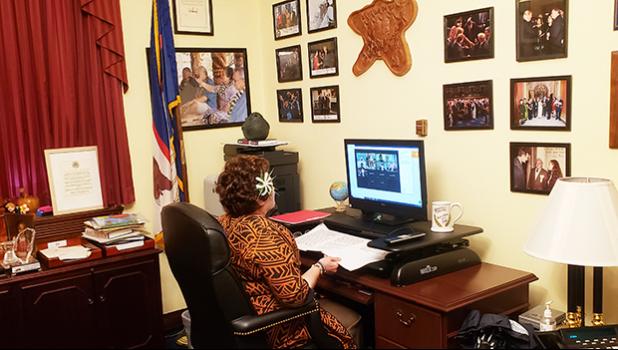 Washington, D.C. — This week, Congresswoman Aumua Amata took part in a historic moment in the U.S. House of Representatives, as the Committee on Veterans’ Affairs held the first ever bipartisan virtual forum.

Congresswoman Amata took part in the remote forum from American Samoa’s congressional office, which included many of the usual procedures led by the Chairman. The forum was titled, Coronavirus Pandemic Response. It examined the impact of economic and health services, with a particular focus on homeless Veterans.

“Congress is not known for changing how business is conducted, so it was interesting and enjoyable to be part of this moment in House history,” said Aumua Amata. “The real focus was not on the way we were meeting, but on the serious situation facing our nation’s Veterans who are most in need.”

Congresswoman Amata took time to express that American Samoa’s needs are unique due to remote location and limited resources, but also uniquely successful in the matter of homelessness because of the tight-knit communities among the people of the islands. Her remarks are available near the 45:30 time stamp in the Committee’s video of the event.

The Department of Veterans Affairs (VA) administers more than 20 programs working to help Veterans and prevent their homelessness. The veteran homeless population has dropped by 50 percent since 2009, so the effort is seeing progress, but the most recent Department of Housing and Urban Development (HUD) Point-in-Time Count estimated that, on a single night in January 2019, 37,085 veterans were experiencing homelessness nationwide.

The Committee discussed the performance of these programs in providing services to families and housing efforts, such as HUD-VASH, as well as the distributions of the historic CARES Act and the aspects of coronavirus relief assisting Veterans.

See video from forum at end of this page.