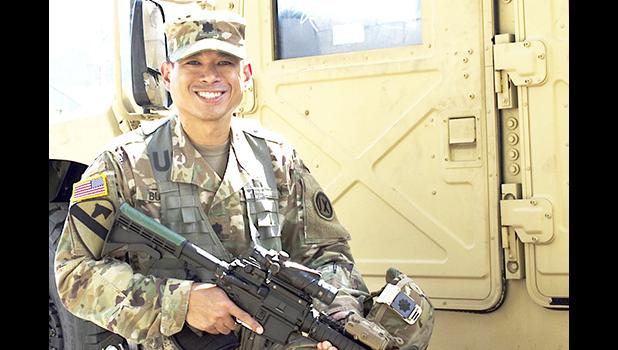 PAGO PAGO, American Samoa — Many Americans know the struggle of a long commute to work, but how many travel thousands of miles to accomplish their tasks regularly?

Buniag’s determination and commitment can be seen in his leadership philosophy.

“In order to convince and inspire others to follow and accomplish a mission, the leader must be a true believer in the mission,” said Buniag. “Only when leaders at all levels understand and believe in a mission, can they pass that understanding and belief to their teams so they can persevere through challenges, execute, and win.”

Born and raised in Saipan, Buniag has spent the past 20 years calling Guam home, where he shares his life with his wife Amanda and their five children. However, those aren’t the only children Buniag spends his time with, when not wearing an Army uniform, the self described math geek is a fifth grade school teacher on Anderson Air Force Base, Guam.

Though the TSG may be a small unit in personnel, its responsibility is immeasurable. The TSG is responsible for the entire Pele U.S. Army Reserve Center, the new state-of-the-art Modular Small Arms Range, the Defense Enrollment Eligibility Reporting System for the island, and is responsible for the other American Samoa tenant units’ wellbeing.

“I’m just so privileged to be part of history,” Buniag added. “This is a fantastic unit, and now with the MSAR opening on American Samoa, the very first one in the entire Army Reserve, it’s truly an honor.”

One might say the TSG team is still getting to know one another with Buniag being relatively new to his roll, and his executive officer, Capt. Ruth Fa’Atiga, just coming onboard within the past month as well.

“We’re still getting to know one another,” said Fa’Atiga. “However, so far it’s great working with him. He gives clear guidance with clear expectations and I see nothing but greatness ahead for our unit.”

Even the most competent leaders can be overwhelmed if they try to tackle multiple, or a number of tasks simultaneously, so Buniag’s motto is to “Keep things simple, prioritize, and execute.”

“Simplifying as much as possible is crucial to success,” he added. “Keep plans, orders and communications simple, clear and concise, and we will see success.”

Buniag expressed that there is an unwritten rule about leadership. Leaders are responsible for everything in a business, operation, or mission. Implementing extreme ownership requires checking your ego at the door and operating with a high degree of humility.

“I’m very blessed,” added Buniag. “This is a great unit, and though we may be small, we leave a very big footprint here in American Samoa.”