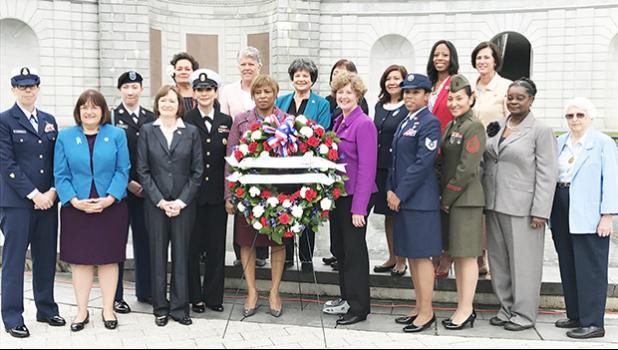 Washington, D.C. — Congresswoman Aumua Amata gave moving remarks last Wednesday at Arlington National Cemetery’s - Women’s Memorial in recognition of Memorial Day and the service and sacrifices that women have given to the United States Military.  The Congresswoman was honored to be invited to speak at the event as the representative from the House Veterans Affairs Committee. This year marks the 20th anniversary of the Congressional Caucus for Women’s Issues laying a wreath at the memorial.

“As a member of the House Veterans Affairs Committee, I can confidently tell you that we will continue to do all we can to ensure that our women veterans are being given the same benefits and services as their male counterparts, as well as the same level of respect,” stated Amata.

“Women have fought alongside their male counterparts in all conflicts since winning our independence, and will continue to do even more as we move forward.  Gone are the days of relegating women to strictly nursing and supply posts…Our women are now fighter pilots, combat engineers and yes even infantrywomen…the first class of enlisted infantry women graduated from OSUT (One Station Unit Training) just last week.  We should all be very proud!” continued the Congresswoman.

“I would like to thank Co-Chairs Susan Brooks & Lois Frankel, and Co-Vice Chairs Mimi Walters & Brenda Lawrence, and the rest of the Congressional Caucus for Women’s Issues for inviting me to speak at this wonderful event,” stated Amata.  “We must continue to recognize and thank our women veterans and service members for the sacrifices they make on our behalf, not only on Memorial Day, but every day,” concluded the Congresswoman.