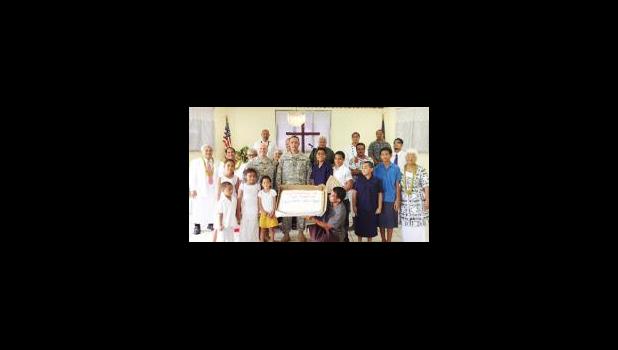 Captain Puletasi Wong-Mageo (in Army fatigues, in front of cake) has been promoted to Major in the US Army and the promotion ceremony was held Mar. 6 at the Emmanuel Baptist Church in Leone, presided over by Lt. Col. Clinton Seybold of the American Samoa US Army Reserve Installation Commander. In this photo provided by the family, church leaders, family members and others surround Maj. Wong-Mageo. His Promotion Orders state that the “President of the United States has reposed special trust and confidence in your patriotism, valor, fidelity and abilities in view of these qualities and your demonstrated potential for increased responsibility, you are, therefore, promoted, in the US Army to the Grade of Major...effective 01 March 2016...” According to the local Army Reserve, Wong-Mageo successfully completed his 3-year tour as the Executive Officer of the local US Army Reserve Installation. He will be leaving the island soon with his family to take up a new post in California. Replacing him in American Samoa will be Cpt. Charles Chapa, who will be on ground late April. In the interim, Seybold will be supervising daily operations at the US Army Reserve Center in Tafuna.