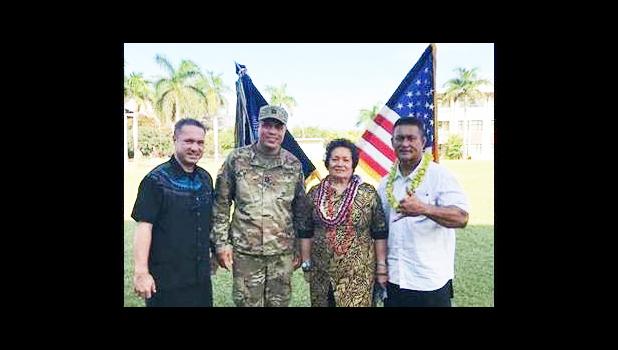 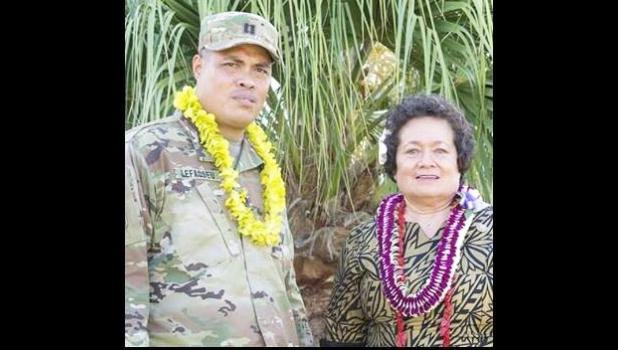 Washington, D.C. — Last Saturday, Congresswoman Aumua Amata was pleased to give remarks at the Change of Command Ceremony transferring command of the “Hitmen” Company of the 100th Battalion, 442nd Infantry Regiment, to Captain Afu Lefaoseu III. He is from Pago Pago, and is another of our own making American Samoa proud.

“Congratulations to Captain Afu Lefaoseu as he takes command of this company, and continues the tremendous heritage of the famous 442nd Infantry,” said Aumua Amata.

“It was a real pleasure to be there, and say a few words. Captain Lefaoseu is one of our own. He’ll continue to make us proud, and we’re proud of everyone from our islands that chooses this honorable profession,” she said.

Under the leadership of Lieutenant Colonel Matthew L. Cloud, on January 27, 2018, the Change of Command from Captain Vancamp J. Popese to Captain Lefaoseu was held at Fort Shafter Flats Parade Field, Honolulu, Hawai’i.

Captain Lefaoseu and the “Hitmen” company is part of a great tradition.

In the entire history of the U.S. military, the 442nd Infantry Regiment, known for its motto “Go for Broke,” became the most decorated American unit for its size and length of service in World War II. At the time, the U.S. regiment comprised Japanese Americans, and they were involved in heavy fighting in 1944 in Europe. In all, out of 18,000 soldiers, the regiment earned 9,486 Purple Hearts, 21 Medals of Honor and seven presidential unit citations. Since World War II, they’ve continued serving admirably.

“Speaking to soldiers and attending military events like this are among the most meaningful moments I experience as a Member of Congress – because of what their service means to this great country,” continued Congresswoman Amata.

“To each of you serving, we’re thinking of you all, and we deeply appreciate what you’re doing for all of us, ” she concluded.

Amara’s father, the late former Governor Tali Peter T. Coleman served in the 100th Battalion 442nd Infantry and she was especially delighted to take part in the Change of Command Ceremony.