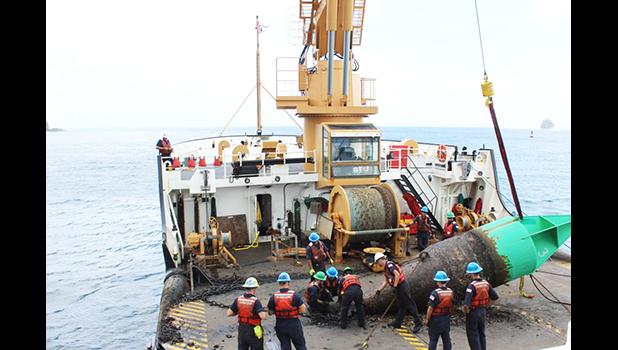 HONOLULU — The crew of the Coast Guard Cutter Juniper (WLB 201) returned to Honolulu after completing a 45-day patrol in Oceania in support of Operation ‘Aiga’ on Friday.

During the 10,000 nautical-mile patrol, the cutter's crew conducted operations to counter illegal, unreported, and unregulated fishing (IUU) and strengthened relations with foreign allies while promoting the collective maritime sovereignty and resource security of partner nations in the Indo-Pacific.

Operation ‘Aiga’, the Samoan word for family, is designed to integrate Coast Guard capabilities and operations with our Pacific Island Country partners in order to effectively and efficiently protect shared national interests, combat IUU fishing, and strengthen maritime governance on the high seas.

“During our deployment in Oceania, Juniper conducted fisheries enforcement in an effort to counter and deter illegal fishing activities in the Central Pacific,” said Cmdr. Chris Jasnoch, the Juniper’s commanding officer. “We were able to establish a presence on the high seas and in the U.S. Exclusive Economic Zone (EEZ) in American Samoa while also patrolling our partner nation’s EEZs.”

The Juniper’s crew worked under the Western and Central Pacific Fisheries Commission (WCPFC), which strives to protect the region’s fish stocks on the high seas. The WCPFC has 26 member nations and 7 participating territories, 18 of which have enforcing authority. The United States is both a WCPFC member and an enforcing nation.

“We get to take part in a unique, rewarding mission in the Pacific,” said Lt. j.g. Ryan Burk, the operations officer on the Juniper. “We have the privilege of building and strengthening relationships with our Pacific Island partners, while protecting and preserving global resources.”

During the patrol the Juniper embarked a Mandarin linguist from the U.S. Marine Corps to query 11 foreign fishing vessels and board 4 fishing vessels, generating vital information reports for IUU in the region.

The crew also conducted joint operations with a French Navy Falcon-200 aircraft to identify and intercept vessels on the high seas. They also conducted a fueling evolution with the Coast Guard Cutter Oliver Berry’s crew, another participant in Operation ‘Aiga.

“We strengthened our joint capabilities with the French Navy in the fight against IUU fishing activities on the high seas in support of the WCPFC,” said Jasnoch.

In addition to normal buoy maintenance, Juniper accomplished the first Waterways Analysis and Management System Report for Pago Pago since 2003. This report integrates the opinions of Pago Pago Harbor’s regular users to review the relevance of existing aids and reevaluate where new aids would be useful, ensuring the sustainability and safety of the waterway.

Juniper’s crew also put together a donation box for the children in Pago Pago, including: sporting equipment, books and toys for the Boys and Girls Club of American Samoa.

“Despite COVID restrictions preventing an in-person event, it felt good to know that we made a difference,” said Ensign Elaine Weaver, the Juniper’s community relations officer.

The Juniper is a 225-foot seagoing buoy tender home ported in Honolulu and is responsible for maintaining aids to navigation, performing maritime law enforcement, port and coastal security, search and rescue and environmental protection.