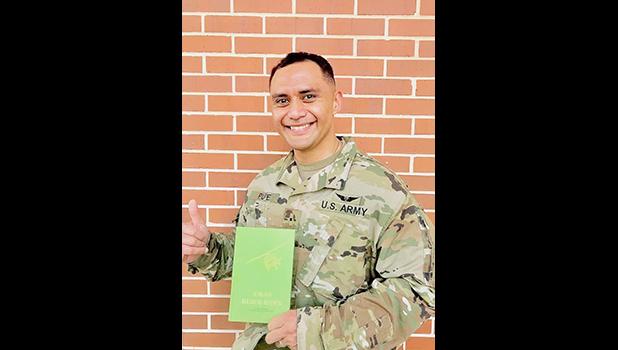 Congresswoman Uifa’atali Amata is congratulating and highlighting the accomplishment of WO1 Freddy E. Pu’e, of Leone, who graduates from Army Blackhawk helicopter pilot’s training this week in a ceremony at Fort Rucker, Alabama.

“Congratulations to Warrant Officer Freddy Pu’e for completing flight school training, and taking on his new role in serving our nation as a UH-60M Blackhawk Pilot,” said Congresswoman Uifa’atali. “This occasion represents so much hard work and study, and is the well-earned outcome of many hours of dedication. It is our true delight to honor this rare achievement as he becomes the first Samoan Blackhawk pilot in the U.S. Army.

(In congratulating Warrant Officer Freddy Pu’e upon his tremendous accomplishment of graduating this week as an Army Blackhawk pilot, I mistakenly was under the understanding he was the only Samoan to do so. It turns out several Samoan Service Members have similar achievements and service as pilots. I did not intentionally overlook anyone, and I want to thank each and every one for their valued service and their example as Toa o Samoa. We’re so proud of all who serve, and it is the blessing of my lifetime to serve them on the House Committee on Veterans’ Affairs. God bless them all. ~Uifa’atali Amata)

“Thank you for your service as you graduate from the U.S. Army Aviation Flight School and officially receive your pilot’s wings,” Uifa’atali continued. “This is an important position of trust and service to the United States. As the U.S. Representative from your home in American Samoa, I am so pleased to be able to send you congratulations publicly, as I know everyone in our beautiful islands will take pride in another of our Toa o Samoa succeeding and growing in this honorable career.

“You are yet another great example of leadership for our youth. Enjoy the ceremony at the Army Aviation Museum in Fort Rucker, Alabama, and may God bless and keep you in your career as an Army pilot.”

Congresswoman Uifa’atali had hoped to attend the special ceremony at his invitation to represent all the American Samoans who cannot make the trip there, but the U.S. Army and Fort Rucker leadership has made the necessary decision to limit the occasion to base personnel due to the current caseload of COVID in the United States.