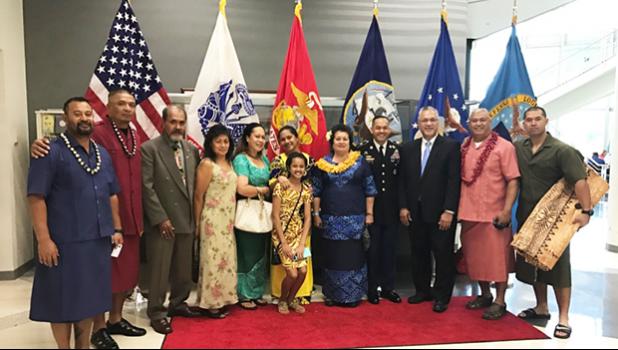 Washington, DC — Congresswoman Aumua Amata would like to extend her sincere congratulations and appreciation to Command Sergeant Major Charles M. Tobin, who retires from the United States Army this month after nearly 34 years of service.

CSM Tobin is a native of Pago Pago, American Samoa and Lotopa Village, Samoa, and joined the Army in October 1983.

“I consider CSM Tobin to be a very close friend. I first met Charles when the Army invited me to Germany to celebrate Asian Pacific Heritage Month, and over the years I have gotten to know him well,” stated Amata. “We in American Samoa are all very proud of each and every one of our sons and daughters who serve in our great nation’s military, and today, we are doubly proud of the Command Sergeant Major for his outstanding and steadfast service to our grateful nation. May God continue to bless you Command Sergeant Major Tobin, and best wishes on your future endeavors.”