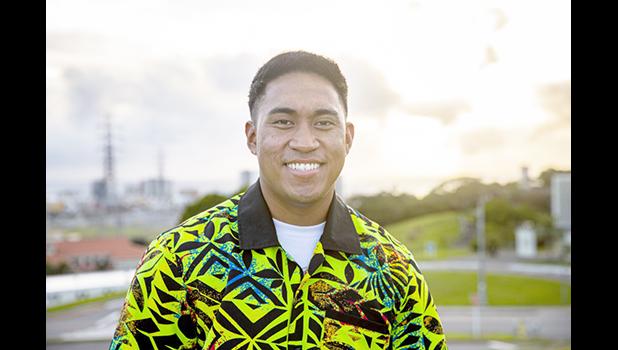 Auvaa grew up in A’asu, a village on the north coast of Tutuila Island, American Samoa. When he turned 16 years old in 2016, he moved to the U.S. by himself and lived in Anchorage, Alaska, with his cousins.

“Moving to the U.S. was a complete culture shock to me,” said Auvaa. “Growing up in American Samoa, I was taught values that differ from what are taught in the U.S. As a Marine, I still implement these values such as respect for seniority, as it is the right thing to do and has always been second-nature for me.”

Even stationed in Okinawa, Japan, Auvaa still keeps Samoan cultural relics that serve as a constant reminder of home. In his room within arms-reach is a O Le Tusi Paia, the Samoan Bible; a lavalava, and a traditional Samoan tunic. The tunic, handmade by his mother, was worn by Auvaa at his father’s funeral when he passed away on Oct. 14, 2019.

“The most important thing is to never forget where you came from,” said Auvaa. “Keeping my strong Samoan and familial values is always of the utmost importance to me. The items I have from Samoa keep me rooted to what I believe in.”

At the age of 17, Auvaa was recruited out of Recruiting Substation Anchorage and entered the Delayed Entry Program. He went to Marine Corps Recruit Depot San Diego on June 5, 2018, to complete recruit training. After graduating recruit training, Auvaa completed Marine Combat Training, School of Infantry - West, as well as his military occupational specialty training at the Personnel Administration School aboard Camp Johnson, North Carolina.

Auvaa explained that he arrived to Okinawa on March 21, 2019, to report into his unit. Since then, he has worked in different departments at the IPAC including the customer service branch and pay section before his promotion to corporal on Oct. 1, 2020.

“I have had the fortune to work in a wide variety of sections at the IPAC,” said Auvaa. “When I became a noncommissioned officer, I gained more responsibility over my section. Now I have the opportunity to mentor Marines under my charge and pass down all of the information I have learned from my time here.”

The month of May represents and pays tribute to Asian-American and Pacific-Islander heritage, and recognizes the contribution and influences their cultures made which play an instrumental part in the past, present and future success of the United States of America.

“It is humbling to be one of the first Marines you meet when you set foot on Okinawa,” said Auvaa. “Helping Marines get to where they need to go once they are here is one of the things I enjoy most about my work at IPAC.”