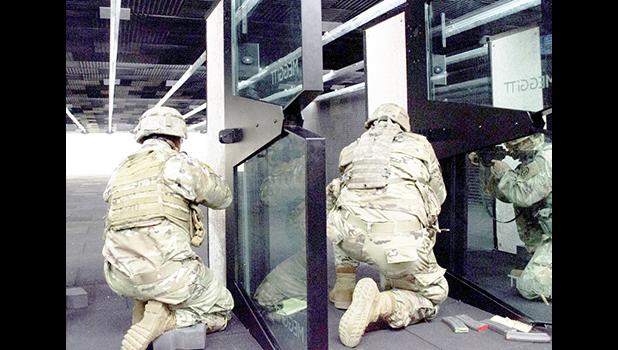 Pago Page, AMERICAN SAMOA —  American Samoa has a rich history of “Firsts” in a long U.S. Army Reserve lineage, like hosting two companies from the 100th Infantry ‘Go for Broke’ Battalion, 442nd Infantry Regiment, 9th Mission Support Command, which is the Army Reserve’s only infantry battalion. However, now they can also add the honor of the very first Army Reserve modular small arms indoor weapons range residing on the island to their resume, as a grand opening ceremony commemorated the range, April 26, 2019.

The Modular Small Arms Range is a state-of-the-art indoor weapons range that ensures both safety and environmental concerns. It allows both standard 5.56 mm and 9 mm rounds to be fired in it with no chance of a bullet escaping the structure regardless of the direction it is fired, according to manufacturer Laser Shot Simulations. In addition, the MSAR has a state-of-the-art filtration system to prevent any gas or fume from escaping into the environment, while also filtering the internal air for those inside using the range.

The ceremony consisted of several guest speakers, an oral presentation of American Samoa’s history, a ceremonial blessing, and a ribbon cutting.

Now that American Samoa has its own MSAR, the local Soldiers no longer need to fly to Hawaii for their annual weapons familiarization and qualification, saving taxpayers an immeasurable amount of tax dollars.

The small island of American Samoa’s only military presence is the Army Reserve, with approximately 300 Soldiers in its ranks. So, ensuring the Soldiers are fully mission capable is also paramount to the benefit of the entire island.

The conception and determination to build a small arms range on American Samoa began approximately 10 years ago with various iterations being considered until Congressional funding in 2016 came to fruition with a cost of approximately 10 million, according to Joseph Yokoyama, a training resources specialist with the 9th Mission Support Command.

“By eliminating the need for local American Samoa Soldiers to travel to Hawaii for weapons qualification not only saves money, it also frees up their limited time for other training,” said Yokoyama. “Collective training is critical, but also very important for unit cohesion. So if they can spend more time training together, rather than flying off to Hawaii for weapons qualification, all the better.”

The Army Reserve has all eyes on the MSAR opening, which may very well set a precedent for other MSARs in remote locations where traditional outdoor ranges are not available. The 9th MSC has their sights now fixed on placing an MSAR in Saipan, which is another location where Army Reserve Soldiers are required to fly to Hawaii or Guam for their annual weapons familiarization and qualification.

U.S. Army Sgt. Talaleomalie Mortenson, a local American Samoan assigned to the 411th Forward Support Company, 411th Engineer Battalion, 303rd Maneuver Enhancement Brigade, 9th Mission Support Command, was thrilled with the opening of the MSAR as she’ll now be able to train on island more often and not be required to fly to Hawaii.

“I’m excited,” said Mortenson. “I’m hoping we can come in here and fire our weapons several times per year and remain proficient with our basic Soldiering skills.”

An additional benefit of the MSAR is the lack of noise a traditional outdoor rifle range produces. Neighbors may not even realize weapons are being fired on any given day. However, with an impending memorandum of understanding slated for signing with the local government, the American Samoa Police Force will also use the MSAR, which is a direct benefit to the local community.

“This MSAR is seriously state-of-the-art, and so convenient,” said Sgt. Ambrose Faatoafe, an infantryman with Charlie Company, 100th Infantry Battalion, 442nd Infantry Regiment, 9th Mission Support Command, after using the range for the first time. “Not only is it convenient, but it also keeps us out of the elements and provides a safe environment to practice in.”

Anderson closed the ceremony by addressing the local Soldiers specifically.

“Soldiers of American Samoa, past and present,” added Anderson. ”You spoke, you told us what you wanted. We listened. Now enjoy your new range!”