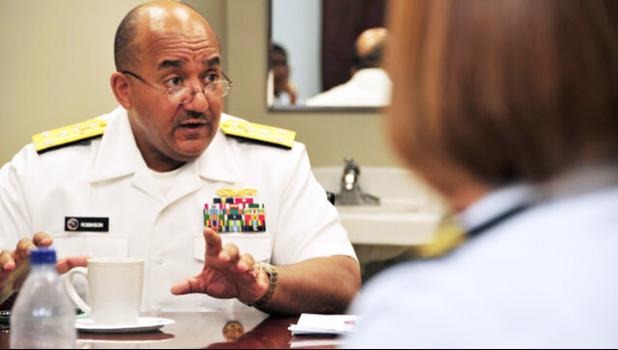 By
Kevin Knodell
Source: Honolulu Civil Beat
A former Navy surgeon general takes on the care of veterans in Hawaii and across the Pacific.

Honolulu, HAWAII —The Department of Veterans Affairs Pacific Island System is unlike few other medical systems in the world.

Based in Hawaii, it spans approximately 2.6 million square miles and is responsible for all veterans of the U.S. armed forces residing in Hawaii, American Samoa, Guam and the Northern Marianas.

Dr. Adam Robinson, the system’s new director, arrived this summer to take on the job amid a raging COVID-19 pandemic. The retired admiral, who served as the Navy’s 36th surgeon general, said his work cuts across three time zones and the international dateline.

“The thing that I haven’t been able to do as well as I’d like is to be able to get out and about and see the staff,” Robinson said. “But we’ll get there, we’ll be able to do that.”

Robinson has an ambitious vision as he gets to work in Hawaii and figures out how to provide service to thousands of veterans spread across the world’s largest ocean. He hopes to use both new technology and local knowledge as he takes on medicine in the COVID-19 era.

“He has a long career in providing care and in improving systems of care in the U.S. Navy and the VA,” said Kim Hall, the nurse executive for the Pacific Island System. “We’re very fortunate to have him here.”

During Robinson’s time on active duty he served at a variety of posts at military hospitals and ships at sea. He assumed the duties as the Navy’s top medical officer in 2005, overseeing both the Navy and Marine Corps health care systems and serving as the top adviser on all health care matters to the secretary of the Navy, the chief of Naval operations and the commandant of the Marine Corps.

He left the Navy in 2011 and has spent seven years working with the VA. He oversaw and worked for the agency’s Maryland Healthcare System in Baltimore, becoming its director in 2015 and overseeing operations before coming to Hawaii.

“We won what I call the director lottery,” said Amy Rohlfs, the VA Pacific Island System’s spokeswoman, who formerly worked for Robinson in Baltimore.

The post-9/11 generation of veterans in particular has faced unique hurdles as they try to reintegrate into society even as war continues. For over two decades troops have continuously deployed to farflung conflict zones including Iraq, Afghanistan, Syria, Somalia and other countries.

Today less than 1% of Americans serve in the military, in some cases leaving the burdens to intergenerational military families. Many younger veterans have reported feeling isolated from and forgotten by a civilian society. Even before the pandemic, unemployment among post-9/11 veterans was on the rise.

Robinson said that the VA has come a long way in better differentiating the different causes of mental and emotional problems that veterans can face as they try to reintegrate into society. Stay home orders related to the pandemic have exacerbated feelings of isolation.

But Robinson said that telemedicine and online tools can better reach people in their homes, whether it’s for mental health care or physical ailments.

“If you feel that you need to have care, I want to make sure that care comes to you,” said Robinson. “I was invested in this as I left Maryland, the Maryland VA Medical Center in Baltimore. And I’m just as invested here.”

New technologies are emerging that allow health care providers to monitor a patient’s respiratory and cardiovascular health remotely. Robinson said that even remote surgery could be possible “much sooner than you might think.”

“Our clinicians and nurses have been pleasantly surprised with the discovery that visits can be just as helpful for many check-ins and evaluations,” said Hall.

“I have to give veterans the care they need, where and when they need it,” he said. “I need to make sure that our system is working towards the veteran, and that I’m decreasing the system’s attempt to make the veteran work towards us.”

The Pacific Island System has conducted 28,000 video appointments so far since Jan. 1, which Rohlfs said is a 1,400% increase from last year.

“The transition in primary care in some of our specialist services, such as orthopedics, which might need to examine the knee, for example, to find out what to recommend next, is vital,” said the system’s deputy chief of staff, Dr. Scott Masters. “But we found a way to do most of what can be done in terms of history taking in the virtual realm.”

Even so, Robinson believes there’s more potential. “To be honest, I really think that we are underutilizing video telehealth or video health,” he said.

He points out that moving patients and personnel between the Pacific Islands can put incredible strain on all sides in terms of costs, logistics and stress.

“I cannot get even to the outer islands of Hawaii without air travel and without a lot of arrangements,” Robinson said. “For a large, integrated health system that expands over this amount of geographic territory, in this instance in the Pacific, telemedicine is the way to go. So that’s that’s what I’d like to do.”

Robinson acknowledged that some older veterans have at times shown a skepticism toward technology, but that most come around quickly when they get the opportunity to use it. He said that most technology today is relatively easy to use and provides convenience to elderly people who may have difficulty moving around.

The bigger challenge he said is internet infrastructure; many parts of the Pacific have difficulty getting reliable access. But he said that satellite phones and other methods can fill those gaps.

While the VA can’t reach every veteran in their home, clinics and hospitals around the islands are increasingly utilizing teleconferencing to connect patients and care providers across the ocean.

“He immediately appreciated the complexity of care that we provide across the Hawaiian Islands and also to Guam, Saipan and American Samoa for veterans who live there,” said Masters. “I think he has a deep appreciation for cultural factors that determine how and when our veterans seek care, and the challenges in how to provide that care across thousands of miles of ocean at times.”

Robinson also hopes to make an investment in local talent, finding ways to train and hire licensed practical nurses, nursing assistants and medical assistants from Hawaii and Pacific Islands in an effort to both boost public health and find staff willing to stay on beyond their residencies.

“The reason that I want to do it with the local islanders, the Indigenous population, is we may be able to get them to stay, because that’s their home,” he said. “So there’s an investment in education and in time to see if I can get health care professionals that I could train and actually keep in some of these islands and then partner with them with the virtual modalities.”

Robinson hopes that empowering local providers can help create a more sustainable model which sometimes relies on health care workers from the mainland who may not stick around, and provide better continuity of care for veterans.