‘One of our own’ enjoys results of her hard work, Mercy Te’o promoted to Major 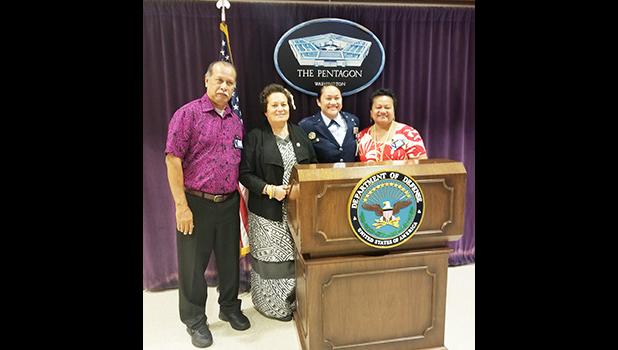 Washington, D.C. – Friday, Congresswoman Aumua Amata was pleased to extend congratulations to Mercy Te’o of the village of Lauli’i upon her Air Force promotion from the rank of Captain to Major.

“I want to send out a special congratulations to Major Te’o upon this advancement in the U.S. Air Force,” said Aumua Amata. “I’m so pleased to see ‘one of our own’ enjoying the results of her hard work, dedication and abilities. Serving the country is an honorable life’s work, and she is making us all proud, and taking on growing leadership responsibilities.”

Congresswoman Amata with Major Te’o and her mother Epenesa Jennings at the USAF promotion ceremony at the Pentagon. [courtesy photo]

Major Te’o’s parents are Epenesa and Philo Jennings, and she is one of seven siblings. She especially credits the successful influences of her Papa, High Chief Fa’aofonu’u Samia Tupe Te’o; her Nana, Leatumalama Tavia Te’o; and makes special mention of her mother. She also appreciates the influences of her aunts and uncles.

She graduated from Fagaitua High School in 2004, and then the United States Air Force Academy in Colorado, from which she was commissioned into the Unites States Air Force in 2009. Major Te’o expresses her life’s priorities as loving God, her family, her American Samoan heritage and culture, and our nation.

Lots of family & friends of Major Te’o were happy to join her at the Pentagon for the USAF promotion ceremony. [courtesy photo]

Major Te’o serves at the Pentagon in Arlington, Virginia, specifically in the Headquarters Air Force, Civil Engineer Directorate, and the Air Force promotion ceremony was held at the Pentagon.

Celebrating at the Pentagon with Major Te’o. [courtesy photo]

“Major Te’o is another wonderful example of American Samoa’s tradition of service to the country,” continued Congresswoman Amata. “During this Christmas season, our thoughts are with our many men and women serving today far from home, and we love and appreciate them all.”