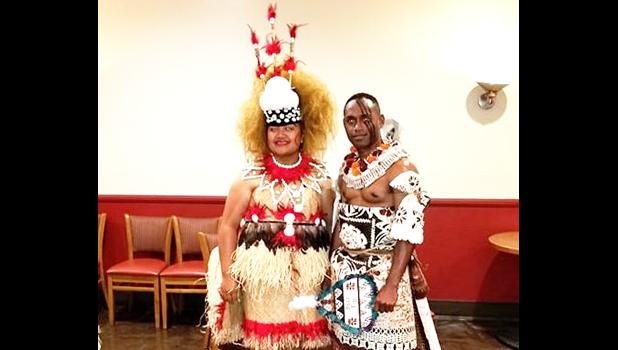 "We recognize the achievements of Americans of Asian American and Pacific Islander heritage in education, business, science, the arts, government, and the Armed Forces, which have strengthened our Nation. We celebrate their story as a unique part of the American story."

Donald Peko and Leone Alofa, both graduates of Leone HS, are now serving in the United States Army, at Fort Stewart, Georgia. They are pictured carrying the American Samoan Flag proudly after their performance for the observance of Asian Pacific Islanders Heritage.  [photo: Arrianna Princess Auvaa]


Fort Stewart, Georgia — soldiers and supporters of Asian and Pacific Islanders Heritage after their show on Wednesday, 22nd May 2019. [courtesy photo]

Taupou Mary Leausa Dorleus from Fagali'I and Ma'asina Fagaloa, Upolu Samoa who resides in Hinesville, Georgia, pictured with Ray Robanadakavu from Suva, Fiji.
The pair is pictured in traditional wear after their performance at the Asian Pacific Islanders Heritage on Wednesday, 22nd May 2019 at Fort Stewart, Georgia. [courtesy photo]

Samoans serving in the US Army, along with their family members, are pictured following their performance this past Wednesday, at US Army Garrison-Humphreys in South Korea. Among the soldiers in the photo is Lehualani Gillis, daughter of Samoa News reporter, Leua Aiono Frost. Thank you all for your service! [courtesy photo]