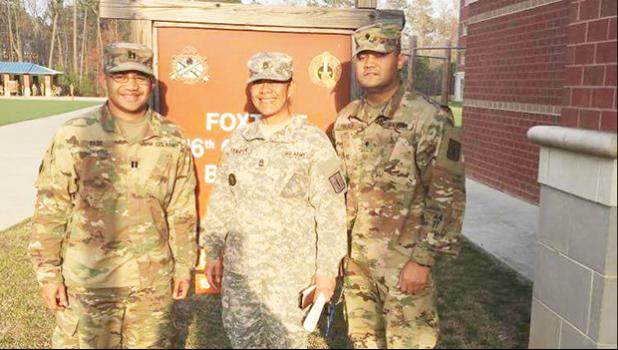 Spec. Robert Toilolo (right) sends a shout out to friends and family who will be happy to know that even in Ft. Lee, Virginia, he has Samoan brothers and sisters — including SFC Leaupepe (center) and his new commanding officer, Capt. Valentino Pase (left).

“It was a surprise and I am very happy to see a Samoan uso being the commanding officer,” Toilolo said.

Spec. Toilolo told Samoa News, “I would also like to send love to my parents Fetulima Fanolua and Alava Fanolua of Pavaiai. And also to friends and my ASG Homeland Security family.”

Toilolo is a prior service US Marine (5 years), worked at ASG Homeland Security and now is with the US Army. He received a Masters degree from Argosy University intends to become an officer in the near future, following in Capt. Pase‘s footsteps.