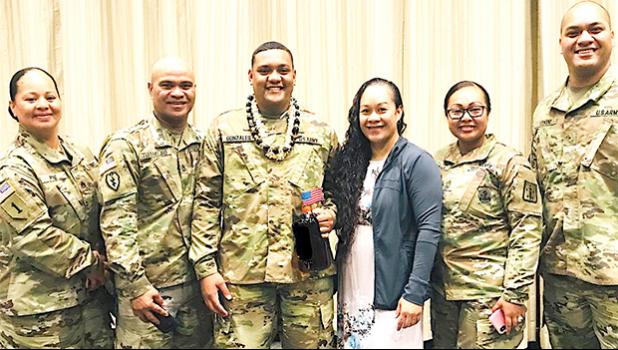 Fort Lee, VIRGINIA — CPT Ricardo Gonzales, (3rd from left) and some of American Samoa’s Toa o Samoa after his promotion ceremony from 1LT to CPT at Fort Lee, VA on May 13, 2019. CPT Gonzales is the son of the late Miguel Gonzales and Eve of Aua.

He is humbled with the opportunity God has blessed him with, saying he would not have come this far without Him. Gonzales thanks his village of Aua for providing him with a great home, and his teachers at Aua Elementary and Faga’itua HS for the academic support. He acknowledges his FHS JROTC instructors SGM Ahing, SSG Fiso and SSG Leutele; his VOC church in Aua, led by late Pastor Telesia and late Pastor Rudolph Tilo, and also Pastor Semi and Faaiuga Vaivao of Heart of Worship Church, for all the prayers and spiritual guidance.

He expressed gratitude to his friends, and families in Samoa, New Zealand, Australia and Ecuador. Lastly but most importantly, his parents, the late Miguel Gonzales and especially his mother Eve Gonzales, for always believing in him, and he is a living testimony of all the sacrifices and good work they have done for their children.