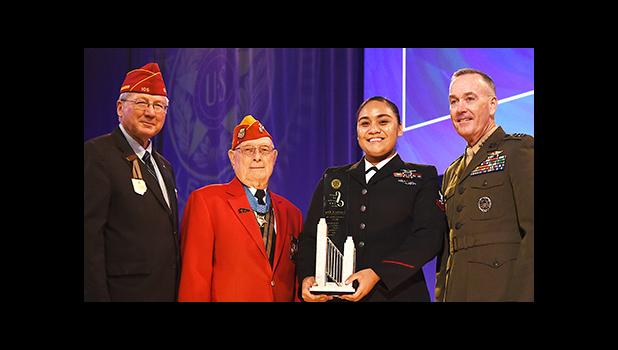 An American Samoan female sailor serving in Japan, where she organized and performed Pacific island culture dances to raise money for communities affected and still suffering from the devastating 2011 tsunami in Japan, is the US Navy’s 2016 recipient of The American Legion’s Spirit of Service Award “in recognition of her extensive volunteer efforts.”

US Navy Petty Officer Second Class, Levetina Salevasaosamoa King was honored along with representatives from the other four armed services at the annual business gathering of the Legion, the nation's largest veterans organization, held Tuesday in Cincinnati.

A 2009 graduate of Fa’asao Marist High School, King is the daughter of Robert and Levetina A. King of Amouli. She is an aviation maintenance administration serving with the Helicopter Maritime Strike Squadron Five One at Atsugi, Japan.

After accepting the award, each recipient gave a speech and King said in her remarks, “Talofa and good morning... I’m extremely grateful and humbled to the American Legion for this wonderful, once in a lifetime, award,” according to a video of the award ceremony by The American Legion.

She also thanked her squadron for “participating and supporting me in all of my community outreach activities. And lastly fa’afetai tele lava, a big thank you, to my family for their prayers, your love and your never ending support.”

Born in Bellevue, Washington, King told the audience that she was “raised in a small village called Amouli in American Samoa, the southern most territory of the United States.” And she personally thanks her parents — who were present in the audience “for raising me to be the woman that I am today.”

She is one of 7 children, three of which also serve in the US Armed Forces. Her sister Leotina, a US Army Reservist; brother Kevin a squad leader in the US Army (and her father is a US Army retiree) and brother J.P., is serving in the US Marines, following after their grandfather, Jake King, a Marine veteran, who served in Guadalcanal during World War II.

“Yes indeed, you can only imagine what happens when we all gather at the dinner table. You have the Navy, Marine and the Army,” she said with a smile while there was laughter from the audience.

“You see I was raised in the strong Catholic faith with a very strong Samoan up bringing. We were taught at an early age that service to family is a way of life. The values I gain from this have become the backbone for my moral compass — God, family, and village,” she points out.

Fast forward to now, King, who turns 25-years old in two weeks time, said “my village is now my country, my family is the Navy and my moral compass is still our Heavenly Father.”

She recalled when in the 6th grade, standing with her sisters on milk crates to cook dinner while her brothers go up to the mountain to pick up coconuts and work the plantation and the younger siblings would be outside doing yard work. “These were our daily chores” to help their parents, she said.

However, she said, none of these are compared to the deafening 5a.m wake up call from her mother every Sunday to get ready for the 7a.m. Mass. “These chores are the basics of my work ethics which have expanded to Japan,” he said.

During her time off duty in Japan, King said, “I’ve organized, participated and performed Pacific island culture dances to raise money for the communities that have been damaged and are still recovering” from the 2011 tsunami in Japan.

She is also an English tutor and camp instructor “for children, who are still physiologically damage or affected by the tsunami as well.”

According to a news release from The American Legion, King volunteered over 400 hours in community relation’s projects with Naval Air Facility, Atsugi, Commander Fleet Activities Yokosuka, and US Army Garrison, and the Samoan Embassy.

She assisted the National Youth Sports Coaches Association by mentoring, guiding, and being a volleyball coach to 26 children ages eleven to fifteen. She spent 31 hours with the local Japanese community assisting youth at Terao Elementary School teaching and practicing English and building strong friendships between the military and civilian communities; she undertook 100 hours leading, organizing and assisting children’s Christmas parties, spring festivals, Toys for Tots, Mominoki-En school for the disabled, and the Chusin Children’s orphanage — all after completing a full day of her Navy duties.

As part of the award event, there was an American Legion parade and King told the audience that “I was so proud and so moved to see sailors, soldiers, marines of all ages stand proudly for the American Flag.”

“But I was a bit saddened to see that my island, American Samoa, was not one of those marching. Maybe this is a challenge for me. Maybe this is my personal goal to kick start a [American Legion] chapter back home,” she said to loud applause from the crowd.

Another round of applause came after she said, “You see American Samoa has one of the most highest military recruits per capita in the nation. And that is what I am very proud of. This is just a reflection of the thousands of Pacific islanders who have served in the Armed Forces since World War I.”

One of those proud Pacific islanders, is her grand-uncle, retired senior chief Faaolataga Salanoa, or senior chief Sao, who served in the US Coast Guard for 26 years. King said she asked her uncle how he manage to deal with serving in the military and being away from home.

“And he said, ‘I love what I did, I’m proud to serve my country. My faith in God has guided me throughout my career. Leve[tina] be true to yourself. Work hard and help each other. Serve your country and serve it well. If you do all these things, God will bless you and you’ll never know how those blessings are revealed. But when they do, my dear niece, it will open up so many doors for you’.”

“This award,” she told the audience, “is itself a blessing and I, on behalf of all Pacific island veterans, Pacific islands active duty members and families, I accept this award with great humility.”

“As for the challenges ahead, my journey ahead, I will take my uncle Sao’s advise — serve your country and serve it well, love your family and keep your compass — God — close to your heart,” she concluded.