2017 through the eyes of RNZ Pacific 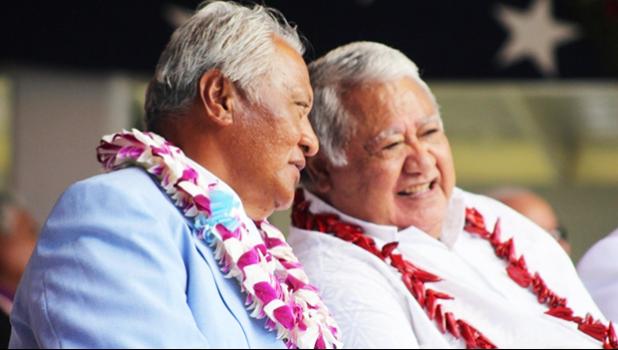 Eruptions, elections, rugby, disaster, music and culture. 2017 has been a year that hasn't been lacking in news for the Pacific, and RNZ Pacific's been across much of it. Our reporters have traveled to the sandy beaches of Rarotonga, the rocky outcrop of Niue, the Papua New Guinea bush, trekked into the hills of Honiara, hitched rides to erupting volcanic islands, and stood by the sports fields of Port Vila, among many others, to cover the year's events. What follows is a collection of photographs from our reporters and correspondents from across the year.

In September, Manaro Voui, the volcano that towers above Ambae, in central Vanuatu, stirred to life, belching smoke and blanketing the island in ash. Crops were choked and water supplies contaminated, which prompted the government make the unprecedented decision to evacuate the entire island and its 11,000 inhabitants. A Dunkirk-style operation swung into action as an armada of boats and ferries evacuated residents to nearby islands, where they stayed in evacuation centres for over a month. The residents have returned to their island, and the volcano's settled down, but the challenges remain. Crops have been ruined, livestock lost, and water tainted. RNZ Pacific's Koroi Hawkins captured these pictures from Ambae and Santo.

Despite the rain, tens of thousands gathered in Auckland in March for the 25th anniversary of the Pasifika Festival. Since 1992, the festival has grown from a "picnic in the park" to the largest Pacific Island cultural gathering in the world.

In March, New Zealand's governor general, Dame Patsy Reddy, jetted off on a quick tour of the realm. While in Niue she knighted the island's premier, Toke Talagi. Sir Toke, who has been premier since 2008, is the second of the island's five premier's to receive a knighthood. A couple of months later, Sir Toke was elected to serve a fourth term as Niue's premier.

In July, the people of Honiara lined the streets for a parade through the centre of the Solomon Islands capital. Dignitaries from around the Pacific, including the Governors General of Australia and New Zealand, had flown in, and crowds gathered from all around to express their thanks to the Regional Assistance Mission, known as RAMSI. Children lined the streets singing, chanting and waving placards. The Australian-led mission, under the auspices of the Pacific Islands Forum, was deployed in 2003 after five years of ethnic violence. It was a state-building mission, and after 14 years, it had come to an end. Koroi Hawkins traveled to Solomon Islands, and produced this Insight programme on the mission, and the challenges ahead for Solomon Islands.

For three years, the people of Solomon Islands' Kwa village have been living in isolated, swampy grassland, trying to build a life with, they say, little assistance from a government that promised to help. They were evacuated from Honiara in the floods of 2014, and now they say they've been abandoned and forgotten.

In June, Vanuatu mourned after its revered president, Baldwin Lonsdale, died unexpectedly at 67. In 2015, Mr Lonsdale's largely ceremonial role became a pillar of stability through a destructive cyclone and political crisis. In July, Tallis Obed Moses, was appointed president by an electoral college.

Papua New Guinea went to the polls for its five yearly election in a process that was lengthy, troubled and fraught with flaws in the electoral process and deadly violence. Peter O'Neill emerged from it for a second term as prime minister, asserting his dominance of the country's political scene.

In September, the people of Tonga were caught by surprise. One Thursday afternoon, King Tupou VI had suddenly dissolved parliament as months of frustrations with the government of Prime Minister 'Akilisi Pohiva came to a head. The decision meant the people of Tonga headed to the polls in November - a year earlier than planned - and handed Mr Pohiva's Democratic Party a resounding victory, giving him a strong mandate to continue to advocate for political reform. Mr Pohiva was re-elected Prime Minister this month.

Auckland and Tonga were seas of red in November. Whether that was good or bad depended on what media you read. What wasn't in doubt, though, was that the Tonga Rugby League team were pulling off something historic, as the Mate Ma'a surged to the competition's final - which included a thrilling victory over New Zealand - and brought thousands of passionate supporters wherever they went. While Tonga fell short at the final, they may have kicked off something bigger. For Tonga, star league players like Jason Taumalolo and Andrew Fifita passed up the opportunity to play for New Zealand, and opted to play for Tonga. After the world cup, there was a hope more people - for more countries - would do the same. Now the conversation has moved to Rugby Union, too.

The internationalisation of the West Papuan self-determination struggle continued to gain traction at the UN level where several leaders of Pacific Islands countries raised concern about human rights abuses in Indonesia's Papua region. Pacific civil society also continued to play a leading role in West Papua advocacy. There was a change in the leadership of the United Liberation Movement for West Papua, with Benny Wenda elevated as the organisation's leader.