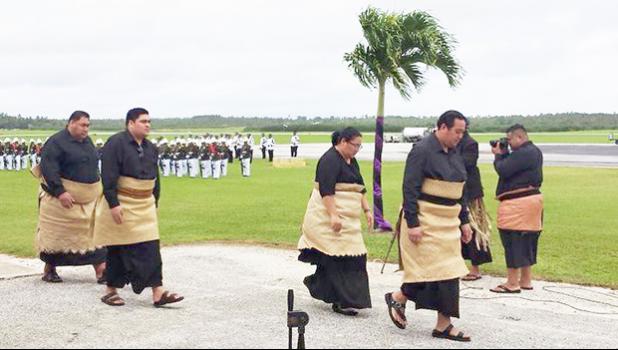 Gov. Lolo Matalasi Moliga has joined leaders of the Pacific in expressing “deepest sadness” over the “passing of the beloved Queen Mother of Tonga, Halaevalu Mata’aho.”

The Royal Palace in Tonga’s capital Nuku’alofa, issued a public message on Feb. 21s announcing that “The Queen Mother peacefully passed away” the evening of Feb. 19 at a hospital in Auckland, New Zealand.

The public announcement, which was posted on the Tonga Ministry of Information and Communications website, didn’t reveal the cause of death.

The Associated Press reported early last week that the Queen Mother was 90 years old and was the mother of two kings: George Tupou V, who died in 2012, and the current monarch, King Tupou VI.

The Queen Mother’s “lifetime of contribution to the kingdom of Tonga and the Tongan people around the world will be long remembered,” wrote Lolo in a condolence message yesterday to Tonga’s King Tupou VI and Queen Nanasipau’u, via the Tongan government Ministry of Information and Communications.

Lolo recalled that during his tenure as Senate President a few years ago, he “had the honor and privilege to meet the Queen Mother at Foamotu” during King Tupou V’s coronation.

“I shall always remember her warmth and generosity of her spirit,” Lolo wrote of the Queen Mother. “She was an inspiration to all, and will be fondly remembered by members of the Tongan community here in the territory.

On behalf of first lady, Cynthia Malala Moliga, Lt. Gov. Lemanu Palepoi Sialega Mauga and on behalf of all the people of American Samoa, “our most sincere condolences go out to you and the Royal Family and to people of Tonga, for your profound loss,” the governor concluded.

According to the Tongan government the Queen Mother’s remains were returned home in Tonga yesterday (Tuesday in Tonga) and taken to the Royal Palace for the ‘Takipo Ceremony’ and will be laid to rest today (Wednesday, Mar. 1 in Tonga, with the Worship Service at the Royal Tombs, Mala’e Kula. There will be a 10-day period of mourning to follow by the Royal Family.

“We are moved with profound sadness at the loss of the tiled ‘Kakala’ whose essence has been the sanctuary and the foundation of love for the Royal House of Tupou,” according to the Royal Palace statement.

According to the AP, the queen mother married Tupouto'a Tungi, the eldest son of Queen Salote Tupou III, in a royal wedding in 1947. Her husband became King Taufa'ahau Tupou IV after Queen Salote died in 1965 and reigned until his death in 2006.

As well as the king, the queen mother is survived by her daughter, Princess Salote Mafile'o Piloevu Tuita, 11 grandchildren and several great-grandchildren.