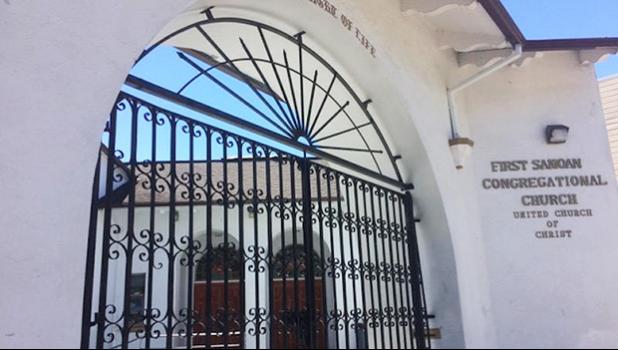 San Francisco, CA — There are the 50 states, of course, but there are 14 territories in the Caribbean and Pacific Islands that are also part of the United States. One of those is American Samoa.

U.S. missionaries, and the military, Arrived there in the 1800s, and by the turn of the century the island became a territory, divided from its independent counterpart, the nation of Samoa.

Now, more than 13,000 people of Samoan ancestry live in the Bay Area — and churches provide a means to preserve their island heritage.

“That’s how the culture survives outside of Samoa,” said Tai Faaleava.

Faaleava was born in Samoa, but moved to New Zealand, and then to the U.S., by the time he was in high school. There are a lot of people like Tai. Both island nations suffer from slow economies, and now more Samoans live abroad than live on the islands.

Traditionally, Samoan communities are tight knit and centered around villages with chiefs.

For those living abroad, Faaleava says the church mimics that structure.

“The structure, the relationship between people, so the interaction, the hierarchy that’s within the church. I think that’s parallel to the Samoan culture,” he said. “It’s kind of duplicated, I would say, from the culture into the set up of the church.”

Missionaries from Europe and the U.S. introduced Christianity to the Samoan islands starting in the early 1800s. Now, 98 percent of the population there identify as Christian.

Last year, the nation of Samoa even changed its constitution to officially make the country a Christian state.

Because Christianity is such a big part of Samoan life, it’s not surprising that Samoan communities abroad are turning to their churches to help preserve their culture.