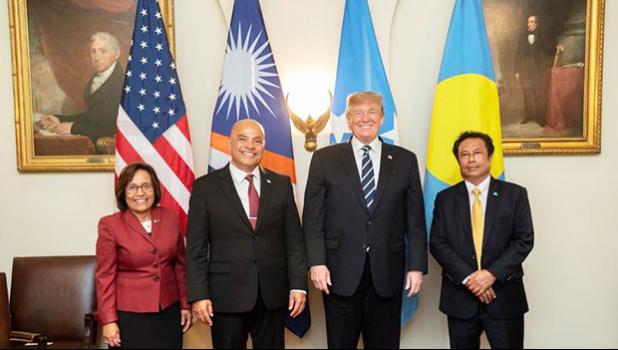 The historic event on Tuesday with Palau, the Marshall Islands and the Federated States of Micronesia renewed Washington's ties to the states.

But a joint-statement released later made no specific mention of climate change, a key issue for Pacific Island states.

Amy Searight from the Center for Strategic and International Studies in Washington said the US had instead focused on security cooperation.

Pacific analyst Tess Newton Cain, of TNC consulting, said the comments coming out of Tuesday meeting paled compared with the attention Pacific leaders have given the issue at summits like the Pacific Islands Forum.

"There was no reference to whether there had been any discussion between the Pacific leaders and President Trump about the US rejoining the Paris agreement, which we might have expected them to talk about."

Instead, issues leaders of at least two of the three Pacific nations at Tuesday's meeting honed in on was China's growing influence in the region.

Last week, Palau President Tommy Remengesau said in an opinion piece that China was threatening the Pacific with expansionism and militarisation.

And on Tuesday, Marshall Islands President Hilda Heine told the US defence secretary that China was placing economic pressure on her country.

"There's growing concern that China is to some degree perhaps meddling in the political processes of these countries, trying to tip the scales for elections or other kinds of things," said Dr Searight.

According to Palau-based journalist Bernadette Carreon, Pacific leaders were also using global fears over China as leverage with other vying partners.

She said Mr Remengesau's opinion piece was uncharacteristically bullish in tone and may help extract concessions from the US, especially leading into the renegotiations of the Compacts of Free Association due to start soon.