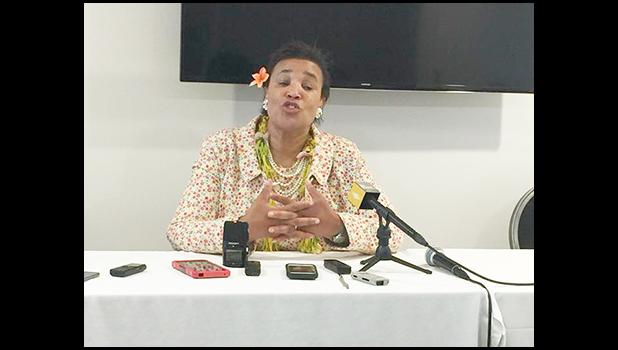 “An increased empowerment and inclusion of women is not just about fairness, it’s about huge economic opportunity that is otherwise simply missed,” yet, exclusion and marginalization prevents women from participating in tackling important issues like climate change, says Patricia Scotland, Commonwealth Secretary-General at the Women’s Affairs Ministerial Meeting in Apia last week.

This is the Commonwealth’s 11th triennial meeting of mostly female leaders and campaigners from around the Commonwealth where climate change was adopted as a standalone priority and the inclusion of women in adaptation interventions reaffirmed as key to success.

During her statement, she said that the under-representation of women and increasing gender inequalities must be reversed if sustainable development goals are to be met. During the meeting she noted that the Commonwealth is setting its commitment in implementing creative solutions to involve women in tackling pressing global issues including climate change. “Climate change poses life-threatening risk to everyone on the planet, and is of particular threat to small island states such as the host Pacific island of Samoa,” she said.

Adapting to and mitigating the effects of climate change is resource-heavy. A UNDP report estimated these costs to be between $249 billion to $1,371 billion annually by 2030. According to the Commonwealth, their Climate Finance Access Hub was launched in November last year, where the Commonwealth helps countries successfully bid for climate action funding, assisting with unlocking existing and new funds for urgent adaption and mitigation.

“New sources of climate funding can help transform traditional gender roles and reduce inequalities, as long as diverse needs are duly considered. Sustainable Development Goal (SDG) 13 set targets for effective climate-change planning in least developed and developing states that focus on women, children and marginalized communities,” according to a statement released at the conclusion of the meeting.

It was noted that the Commonwealth Secretary General has a vital role to play in building on its demonstrated work inclusively incorporating women in all decision making processes. Advancing women’s political participation, leadership and economic empowerment are critical building blocks for achieving all of the SDGs.

Through collaboration with governments at all levels, and working with NGOs and business and civil society groups, shared goals can be achieved. She also pointed out that the Commonwealth must make the connections — economic and social, social and environmental, that will ensure truly lasting development, with no-one left behind. “Alone we are invisible, together we are invincible,” she said.

Also at the Commonwealth meeting Dr Miriama Williams, Senior Program Officer at the intergovernmental organization South Centre stated that if they are going to meet SDG13, climate change financing is a priority. “It must not exacerbate gender inequalities but instead progress gender equality. But we need to know how much is going to reach women. This needs gender analysis of distribution to ensure it reaches women’s organizations and local projects to build their capacity and become more involved globally.”

Dr. Williams further stated that they know that women die more often than men during natural disasters. “We know children and pregnant women are more susceptible to vector and water borne diseases. Finance facilities can no longer simply be gender sensitive but must be transformative, gender responsive and inclusive. Gender cannot be secondary, it is crosscutting in mitigation, adaption and policy.”