Conference on reporting on women and LGBTQI 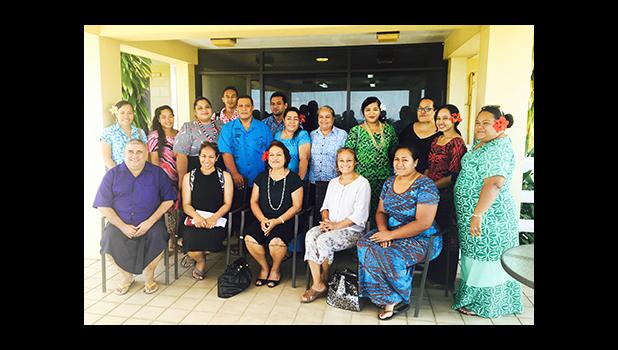 Sponsored by grant from US Embassy, open to Samoa & Am Samoa participants
By
Joyetter Feagaimaali’i-Luamanu
joyetter@samoanews.com

Apia, SAMOA —“First days of training bring so much information that the media has been deprived of regarding women in government, women in parliament, women who are abused physically and verbally, the low percentage of women who hold chiefly titles in the villages and other issues that were never brought to light until this day,” said Autagavaia Tipi Autagavaia a Senior journalist who works for Radio New Zealand, out of Samoa.

He was among the participants attending the Samoa Alliance of Media Practitioners for Development (SAMPOD), which focuses on reporting on sensitive issues on women and the LGBTQI community held at Insel Fehmarn Hotel conference room.

The one-week training was made possible with assistance from a grant from the US Embassy in Samoa under the small grants scheme. U.S. Chargé d’Affaires Angelina Wilkinson with the Samoa US Embassy was the keynote speaker on the first day of the training.

“This year’s Small grants competition was even more competitive than the last one we had, but I am glad that SAMPOD has (been) held two years in a row and managed to secure funding.”  Wilkinson thanked Rudy Bartley, Cherelle Jackson and the SMAPOD for initiating media workshops for the local media. “We are extremely happy to sponsor this project,” she said.

Wilkinson said the daily news is a very powerful tool for dissemination of information to the public and because it is vital to the work in Samoa, it’s important to see that the correct information is being passed out to the public.

“Our mission relies heavily on your work as reporters and journalists to communicate our assistance not only to the people of Samoa but also to report back to the United States,” she said.

In speaking, Rudy Bartley said SAMPOD is made up of volunteer media and development workers. He said that following on from an initial grant in 2015, which conducted an extensive and successful series of trainings for the media, this year’s SAMPOD is focusing on reporting on women and LGBTQI community.

“To draw on international expertise on these issues, SAMPOD has brought on the Dart Center for Journalism and Trauma to provide technical expertise as it relates to reporting on sensitive issues faced by women and LGBTQI community. In line with our belief that the true knowledge and skills on Samoan journalism lay within the cohort of practicing journalists, we will be using a mixed modality whereby we will invite various experts from key organizations that work on the issues discussed, but it is the trainees who will lead discussions and provide overall guidance on the issues and methods.

He further said that the key issues to be discussed include legal issues facing women in the law, culture and labor force. For the LGBTQI the training will focus on ways to report on fa’afafines and other members of the LGBTQI community.

Samoa News is participating in this workshop as a media member and will continue to report on the presentations throughout the week.