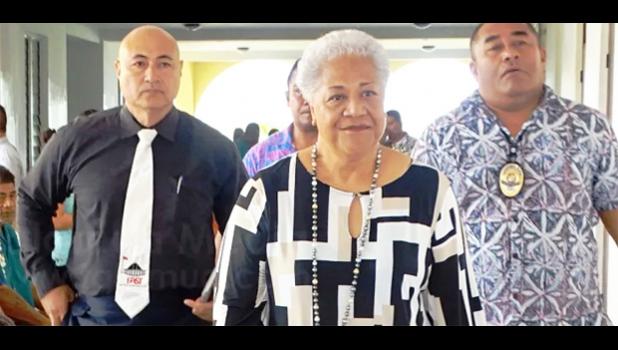 She granted the adjournment but also noted that it would be the final adjournment.

Fiame is charged with one count of bribery from the FAST party campaign rally in the lead up to the April general election and the hearing was set for today after two adjournments in May and September.

Judge Alalatoa reminded both parties via email that if there were any preliminary matters to be dealt with, to inform the Court by Tuesday last week.

However, she was only informed of the application just before she came to preside over the trial.

After discussion with the District Court Senior Judge Talasa Atoa Sagaga, both agreed to call the matter and take it from there.

Counsel for the defendant, Kieran Raftery QC apologized to the Court and said the application was filed last Friday.

The application for the adjournment was for him to have time to get instructions from his client. He did not know about Samoa’s public holiday last week when he scheduled to have a zoom meeting with his client then.

The meeting was later rescheduled but was deferred by the defendant and by Thursday last week, he contacted counsel for the complainant Aumua Ming Leung Wai if he would agree to an adjournment.

Aumua informed the Court that he agreed to the adjournment on the basis of a fair trial given that defence counsel had not received any instructions from his client.

Judge Alalatoa was concerned that the charge has been around since 14 May 2021.

The hearing is now scheduled for 13 and 14 December 2021, but not before the Judge informed counsel of the changes the Court will have to make to accommodate other matters already scheduled for hearing and the fact that his service was not cheap to the client.

Fiame is jointly charged with other Cabinet Ministers, Leatinu’u Wayne Fong and Laaulialemalietoa Leuatea Polataivao Schmidt who will appear in Court today.

The date for seven by-elections in Samoa has been changed.

A social media post by the Office of the Electoral Commission said polling day will now be November 26, and pre-polling will be held two days earlier on November 24.

The Office of the Electoral Commission said the Writ for Elections for all seven Electoral Constituencies will now be issued on 29 October 2021.

Nominations for candidates for all seven Electoral Constituencies will open November 1 and close November 5.

The seven by-elections have been called as a result of petitions against election night winners of the 9 April 2021 General Elections.

The by-elections will be at constituencies on the island of Upolu and only one will be held on the big island Savaii, for the Falealupo Electoral Constituency.