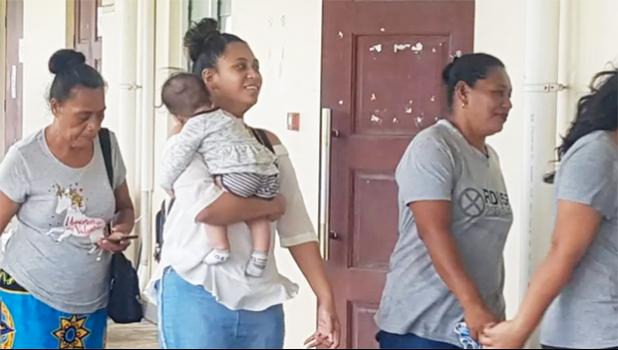 Apia, SAMOA — The trial of six people arrested by police at Faatoia in December last year has been adjourned following an unexpected guilty plea by one of the defendants.

Pitoitua Aloese of Faatoia may become a police informant, as he changed his plea before Justice Vui Clarence Nelson through his lawyer Masoe Charlie Vaai this week.

Aloese was charged alongside three men and two women when Police found guns and narcotics in a Faatoia residence while responding to a domestic violence call.

At the time, Police Commissioner Su’a Fuiavailiili told Samoa Global News that they had found “what appeared to be crystal meth and cannabis, as well as two firearms.”

Esther Tagi of Tufuiopa is represented by Unasa Iuni Sapolu and was seen with her baby in Court Monday morning. Ms Tagi had been pregnant at the time of her arrest last year.

Ana Fuimaono of Vaiusu is represented by Afamasaga Michael Soonalole while AJ Roache of Lotopa and Stuart Tuitama of Faleasiu are represented by Treena Atoa. Tauiliili Lefau Harry Schuster is representing a nephew, Sanele Schuster.

The two women have been out on bail, while Pitoitua Aloese and other male defendants have been in custody since the Boxing Day incident last year.

The  matter has been rescheduled to be heard in December this year.

Su’a Fuiavailiili Egon Keil has taken a strong stance against drugs since taking up the role as Samoa’s Police Commissioner, with a series of drug busts in the last few years including a record-breaking $10 million tala worth of marijuana confiscated from a raid at Faleatiu last year.