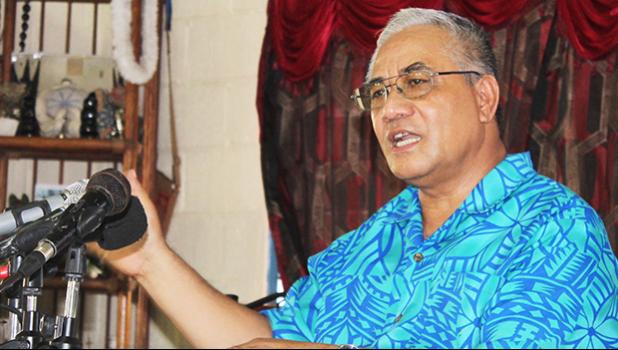 Apia, SAMOA — Former Reverend Opapo So’anai Oeti has leveled heavy allegations against Reverend Elder Tautiaga Senara, chairman of the Congregational Christian Church of Samoa (CCCS), after the Elders Committee stripped him (Opapo) of his pastoral titles within the church, last week, after voting to censor the former fiafeau, who is the father of the stigmata girl, Toaipuapuaga ‘Toa’ Patrick, who claims to be carrying the crucifixion marks of Jesus.

Opapo is no longer a Reverend of the CCCS, a denomination he served for 23 years.

His daughter, Toa, who was a CCCS member, has converted to Catholicism and she’s currently in Rome, accompanied by her husband and two children — they are due to return home next month.

Opapo believes his daughter’s stigmata is the reason why Senara made the move against him. “It’s because he does not believe the marks of Jesus on Toa” and the messages she has been delivering from God.

Holding a press conference at the home in Vaitele, after the Elders decision was made to strip his pastoral titles, he explained that Senara appeared to have been supportive at first, however in the background he had been planning all along to remove him from the church. Opapo told the media that he was disappointed with the decision — nonetheless he would abide by it.

He said that this is the first time a Reverend has not been afforded the opportunity to appear before the Elders Committee to present his case, rather Opapo was handed a decision on Tuesday (Samoa Time) saying that he had been stripped of his pastoral titles.

According to the decision by the Elders Committee, obtained by Samoa News, it indicates that Opapo was disobedient, disrespectful and did not heed the advice of the chairman. The document says that Opapo was instructed to let his daughter go to Rome, but he should stay behind to look after the parish — however he disobeyed.

The document further says that Opapo was instructed to remove the statues that were inside the Church as it goes against the beliefs of the CCCS, but he didn't listen. Also Opapo did not attend the usual village service with other denominations.

In response, Opapo explained that prior to taking his daughter and her family to Rome, he asked for permission from Senara who agreed and said to go, however upon his return he was informed that he has disobeyed instructions from Senara.

Of the statues that are mentioned in the decision document, he said they are gifts from the Catholic Church and “our parish refused to remove them”.  Consequently, Opapo said he wrote to Senara asking him to come and remove the statues, as their members were scared to remove them. He said that there is nothing in the foundation of the CCCS, which disallows having statues inside the church.

Opapo further explained that when he returned from Rome, members of his parish did not wish to attend the monthly service after so many rumors had been going around regarding Opapo being disrespectful and disobeying the Chairman of CCCS.

“I am the reverend and had I gone to the service with my flock it would've been a disaster. They would've fought tooth and nail for me, so I decided not to attend, for the sake of peace, after all that is my role — to keep the peace.”

Opapo said the Elders did not afford him the chance to fight his case and that is wrong, adding this is “communism” and that the church is about honesty and justice, and the actions by the Elders Committee is the total opposite.

He went on to say that there are other CCCS pastors who have made wrong decisions yet they haven't been penalized, but he who has done nothing wrong, has been stripped of his titles.