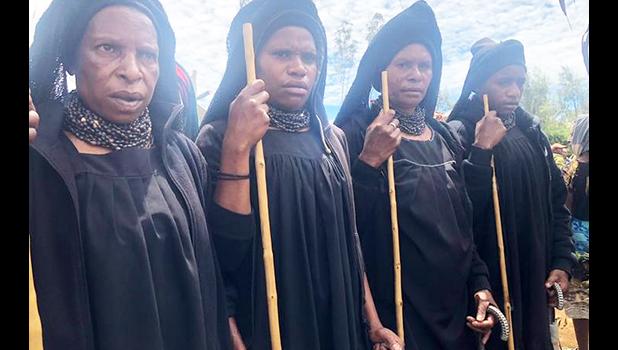 (WARNING: This story contains graphic content that some readers may find upsetting.)

When a young boy died suddenly in Tatape Village in Papua New Guinea's (PNG) highlands, his relatives said dark forces were at work.

Four women were accused of using sanguma — a local term for sorcery or witchcraft — to kill the child.

Sergeant Daniel Olabe from the Hela Police Command alleges the boy's father and others led their tribesmen to where the women were selling baked flour in a local market.

"Eventually they got one of the ladies… and tortured her," he said.

"They hung her up, tied her arms and legs, beat her and started cutting her really badly.

"They did it until 10p.m and she died eventually."

Her dismembered body was left beside a road some kilometres away.

A video of the torture and murder shows a crowd of people watching on.

There have so far been no arrests in relation to the murder, with police saying suspects have fled into nearby bush and mountains, and fighting between groups in the aftermath has made it difficult to go into the area.

The case is one of a string of sorcery-accusation killings across PNG in recent months.

While many parts of the country have a long history of belief in sorcery, what concerns authorities is that many recent killings have occurred in regions where there isn't a tradition of witchcraft.

"This torturing and killing is very serious to us, it's like a first of its kind to us," Sergeant Olabe said.

In another case in the same month, a man was killed by a mob in Daru after being accused of using sorcery.

HOW TRADITIONAL BELIEFS TURNED INTO MURDER

Accusations of sorcery usually follow a sudden or unexplained death, with a grieving village becoming convinced someone among them is to blame.

An accusation can swiftly end in torture, reprisals and lynchings.

But Ruth Kissam, an advocate and expert in the field, who works with local NGO the Tribal Foundation, said the violence didn't have a cultural background, even in areas where belief in sorcery was traditional.

"Sorcery-accusation-related violence picked up about 10 to 15 years ago," she said.

"Culturally, there is a deep belief in sorcery in many parts of Papua New Guinea, but it was never violent.

"The belief system was sorcery against sorcery, and mostly it was believed that the village sorcerer was a man."

Kissam said now the people generally accused were women, often those who were already marginalized or vulnerable and were "easily targeted".

"Now the dynamics have changed, it's become more about power plays," she said.

Kissam said the horrific violence being seen had "absolutely nothing to do with culture" and instead was "a law and order problem that is arising from a broken health system".

She believed disenfranchisement among people who were unable to get adequate healthcare and left school with no jobs to go to was contributing to the problem.

And increased connectivity in PNG, through new roads and easier travel, has also been attributed with spreading sorcery beliefs into regions where it isn't traditional.

Another major concern has been the rise of people called glassmen, or glassmeri for women, who claim to be able to identify a witch.

The Tribal Foundation warned a recent parliamentary enquiry into gender-based violence in PNG they were partly responsible for spreading sorcery into new areas.

"We have people who are glassman and glassmeri who will go into the community and they are profiteering off their [claimed] special ability to say who in the community is the sanguma [or witch]," Tribal Foundation director Gary Bustin said.

"These are just con artists profiting from torture."

It has become a profitable business model for the glassmen, who ask for payment from a community to identify a "witch".

CORONAVIRUS COULD BE A SORCERY 'TIME BOMB'

There are also concerns that deaths related to COVID -19 could lead to an increase in sorcery accusations — and one such case has already been recorded.

A community health worker in the town of Goroka contracted COVID-19 and died at home earlier this year.

"The family in his tribe said the wife used sorcery to kill her husband, so the community got hold of the lady, stripped her naked and tortured her with hot irons," local MP Aiya Tambua said.

Someone alerted the police to the lynching as it was in progress. Before officers arrived, the woman was thrown off a bridge.

She survived but Tambua said while the woman was in hospital, her daughter was also attacked and needed to be rescued by police.

There are reports of "countless" accusations of sorcery following suspected COVID -19 deaths, but the case in Goroka is the only confirmed act of violence so far.

Kissam warned that an accusation was still a mark against someone and that a "build-up" of accusations could see people attacked later, especially when COVID -19 was out of the headlines.

She said the PNG government needed to run an aggressive education campaign explaining the science of the pandemic.

In the wake of the horrific murder of the woman in Hela, PNG's parliament is asking questions.

A newly formed special parliamentary committee on gender-based violence has written to the country's Police Commissioner, asking for information about the investigation and potential arrests.

The letter, written by the committee's chairman Charles Abel also highlights concerns that the police response to sorcery-accusation violence is "often insufficient".

He said the committee had been told "police [were] not attending cases in a timely manner and little or no action [was] being taken to investigate or arrest alleged perpetrators".

A shortage of police in PNG can make investigating the cases difficult, especially as officers are often met with armed and violent community members. PNG's police-to-civilian ratio is about one officer per 2000 people.

"Most of the police are in urban centers and some of them are guarding the mines, they're attached to the resource sector," Kissam said.

Amid the focus on better enforcing existing laws, there are also calls to introduce new legislation specifically targeting glassmen and glassmeri.