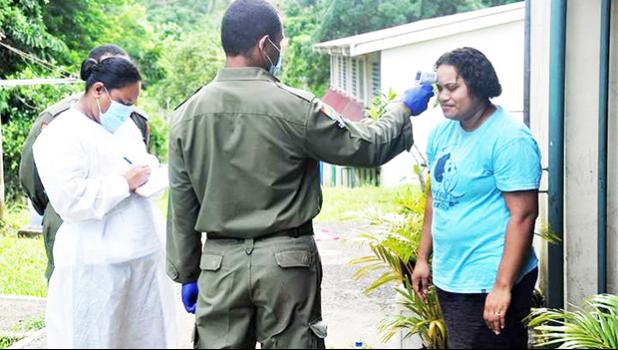 Suva, FIJI — A protocol breach at an isolation facility has resulted in Fiji's first Covid-19 case outside of border quarantine since March last year.

In his address to the nation, Prime Minister Frank Bainimarama said the breach related to an interaction between a soldier working in an isolation facility and a member of the cleaning staff there.

"As announced over the weekend, we detected a case of Covid-19 in a soldier who was working in a border quarantine facility," Bainimarama explained.

He said 69 of the soldier's contacts were tested and all returned negative results for Covid-19, except one.

"Protocol dictates that overlap should not have happened, that is why the woman was not tested before re-entering the public. We have to wait and see what further is revealed in the investigation."

The Nadi-based woman had symptoms last Thursday, Bainimarama said, but she did not notify the authorities.

"That means she was contagious when she was at work on Thursday and later on Friday and Saturday when she travelled through the Lautoka and Nadi areas."

But Bainimarama said another concern for officials is that the woman attended a funeral in Tavakubu, Lautoka on Friday and on Saturday she travelled alongside other passengers in a mini-van.

Her movement using public transport and her attendance, in close proximity alongside many other Fijians at the two-day funeral, makes further transmission in the community highly likely, he said.

"To limit the risk of mass community transmission and to better screen the local population, we have established a Nadi and Lautoka Containment Area and brought new stringent health protection measures into effect."

Bainimarama said it was important that the breach in protocol was not repeated.

"In the meantime, we are confident that our system of border quarantine can function to the high degree it has over the past year."

After the woman tested positive, the government this morning announced an immediate lockdown of Nadi and Lautoka, while the rest of the country received new Covid-19 measures effective Tuesday morning.

The containment area has been set from Qeleloa towards Sigatoka, to Nacilau, Vakabuli, and the Waiwai Crossing towards Ba.

"A 24-hour curfew for the entire containment area was announced this morning to allow our contact tracing teams to trace, identify and quarantine those who may have had contact with this community case.

"And this will help lay the groundwork to flush out any other cases of the virus from our communities.

"From this afternoon, we will be allowing for limited movement and Covid-safe activity within the containment area."

Bainimarama said the new measures were stringent enough to minimise risk, but smart enough to allow people to have some sense of normalcy in their lives.

He said the curfew will revert to 11pm-4am.

"Other businesses such as factories and shops can open as well. However, it is vital that vendors and businesses ensure strict physical distancing before opening their doors."

He said customer-face businesses should limit their capacity to 50 percent.

Businesses that do not manage these risks with Covid-safe plans will be shut down, Bainimarama warned.

Restaurants cannot open for in-person dining, but may offer delivery and take-away services.

"We are also making arrangements to ensure fresh produce, basic food items, manufactured items, and other items can be sent in and out of the containment area."

Bainimarama said the cross-border exchange would be monitored by the police to ensure these goods can flow as freely as possible into Nadi and Lautoka.

The new measures don't end at the borders of the containment area.

Nation-wide, schools including private schools, will be closed from Tuesday for three weeks.

School boarders would be able to return home, the prime minister said.

"If they are in the containment area and need to return home outside of the area, they will be allowed to leave in a highly controlled manner."

NEW MEASURES FOR THE REST OF FIJI

The government said new restrictions will take effect Tuesday for at least the next 14 days to allow people to go about their lives as safely as possible. These include no religious services to be held.

* Non-work gatherings should not happen at all.

* Businesses can remain open with Covid-safe plans. All businesses must require customers display the careFIJI app or they must register their details for contact tracing purposes.

Unfortunately, the prime minister said major sports events over the next 14 days including the schools' Coke Games, university graduations and rugby matches, would be cancelled.

He said people outside of Nadi and Lautoka had 24 hours to enter the containment area if they need to.

"But you will not be allowed to leave for at least the next 14 days.

"We will also approve individuals to travel through the containment area for flights out of Nadi. Aside from some cancellations today, repatriation flights will continue at Nadi International Airport.

"We will be capping visitor arrivals to ensure we have adequate quarantine spaces available to support our robust contact tracing effort.

"To ensure we have adequate space in quarantine facilities, those currently in their quarantine periods will be securely ferried out of the containment area to where they reside once they finish their 14 days of quarantine and clear a negative Covid test result."

Bainimarama said Fijians learned a year ago how these measures worked and staying at home saved lives.

He said it was the best and easiest way to protect each other from getting the deadly virus.

And it's the best way to help Fiji become Covid-contained once again, he said.

"We expect these measures to be maintained for at least the next 14 days. Stay disciplined, and we will get through this. We know what is required of us, we have done this before. Most importantly, we know that it works."

The Health Ministry announced that 24,000 doses of the AstraZeneca vaccine arrived in the country on Monday through the COVAX facility.

The Permanent Secretary for Health James Fong said the health ministry is expected to roll out the vaccine this week and he urged people to get registered.

Dr Fong said despite the lockdown, the ministry would continue to work on securing approved vaccines from the World Health Organisation (WHO).

He said about 50,000 Fijians had registered already to be vaccinated.

"We are likely and we are hoping to get the vaccine rollout this week. We want to be able to complete it by Saturday as we have alluded to.

"What we want to do is have the ability to have 8 to 12 weeks. That's been shown to be able to give the most benefit for the second dose so that's the aim of the exercise."

The ministry said a 38-year-old woman and a 15-year-old boy, both family had travelled to Fiji from the Philippines, and arrived in Nadi via Auckland on 8 April.

The ministry said the other two cases included two men - a 69-year-old and a 38-year-old, who are also family members and had travelled to Fiji from Rajkot, India. They both arrived in Nadi from Singapore on 10 April.

The ministry said all four returned positive test results while undergoing their 14-day quarantine at a government supervised border facility in Nadi.

The ministry said they were isolated at the Lautoka Hospital.

Fiji now has had 73 Covid-19 cases, with five active in border quarantine and one community case while 65 cases recovered with two deaths reported.