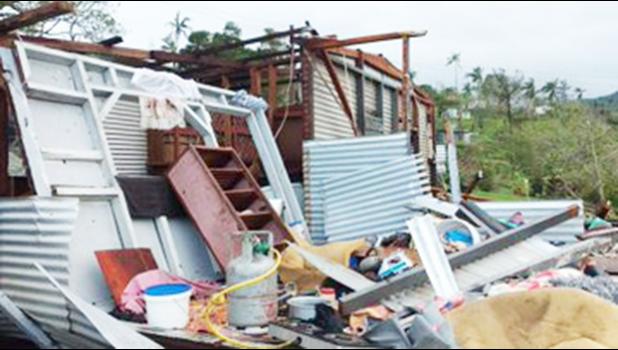 Vanua Levu, FIJI  — Many houses in Fiji's Vanua Levu have been destroyed, some families sheltered under beds and tables in their houses and others in cane plantations, as Cyclone Yasa wreaked havoc in many parts of the Northern Division, Fiji Village reports.

Buildings and crops were destroyed on Vanua Levu, Fiji's second largest island, and there's been widespread flooding and landslides.

There are widespread power outages, and phones are down, after winds of 240km/h - with gusts as high as as 345km/h - but the scale of devastation will not be known until later this morning.

Yasa is heading south through the Southern Lau Island group. It remains a category 5 storm but with signs of weakening.

People in Fiji's northern division described Cyclone Yasa as the scariest experiences of their lives.

"It's a nightmare," said Banuve Lasaqa Lusi, a resident of Labasa, the main town on Vanua Levu. "The thunderous sound of the wind and what is flying around is what's frightening.

She said the sound of the wind was deafening, and power and some communication had been cut out from the town; "I've never seen one like this... it's heartbreaking

In the province of Bua some people had to flee as their houses disintegrated in the wind. Video from Bua shows sheets of torrential rain pelting the ground, and roofs being lifted by the sheer force of the gale.

From Labasa, Lusi said she had made some contact with the Bua region.

"People have had their houses flattened, have escaped with the clothes on their back and are sheltering under beds, under houses as they await help... help that most probably will come when the winds die down."

At the island of Koro to the south of Vanua Levu, destructive winds and heavy rain are being felt in Nasau Village, and people have been relocated to two evacuation centres.

A teacher at Nacamaki District School in Koro, Ilisabeta Daurewa, said they are experiencing damaging winds and several kitchen sheds in the village have been blown away.

She said more than 100 people are taking shelter in six classrooms at the school.

Taveuni Island to the north of Koro, where more than 1,400 people spent the night in evacuation centres, is still being hit by winds.

Panapasa Nayabakoro, who lives in Koro, said 32 people are sheltering at the Nasau Health Centre and the rest are in a school. He said most of their houses are flooded and some of the houses were blown away.

Ali Wilkinson lives in the capital of Suva, and said the night spent awake listening to the storm had been 'scary'.

"Very very windy and a lot of rain, it was pretty noisy. It's still quite windy, it comes through in big gusts, you just think it's going to be calm, and then it comes back and hits again in full force.

"I've been sent footage from staff and friends up in RakiRaki [district, north of Suva], and the town is quite flooded, it's pretty much under water up there."

Correspondent Lice Movono was also in Suva, and said; "it's definitely not normal, but we've been relatively okay".

"At this point people are still bunkering down and still waiting for safety, which should come round about midday.

"The words are... terrifying, frightening, people living in homes where the roof's been taken off and then sheltering under floors, entire farms just lifted away... an uncle I spoke to said 'it's like the mountain's naked', to describe the devastation to agriculture.

Emergency personnel will be able to assess the scale of the damage once it is safe for crews to go out, the National Disaster Management Office says.

A 30-day state of natural disaster has already been declared.