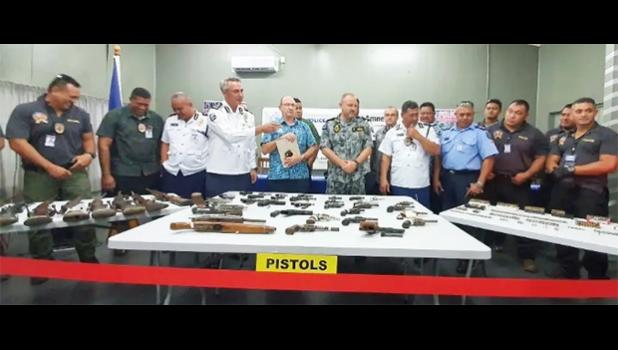 Apia, SAMOA — Almost 200 illegal guns have been handed in by people in Samoa in a gun amnesty which ended yesterday.

A total of 198 weapons were collected.

Ammunition totalling 686 for the various firearms were also handed to the Police.

He said the amnesty was extended by a month to allow owners to hand in illegal firearms without conviction.

Fuiavailili said for each firearm handed into Police, the owner was given a food voucher.

Commissioner Keil revealed that one of the firearms turned in, was linked to an open police case, and has been set apart until investigations are complete.

“The serial number system we have in place allowed us to track this, faafetai foi i le mataala o le matou vaega ia..”

The Commissioner also confirmed that another firearm, although now rusty and dirty, has been identified as a police issued weapon which had somehow ended up in the community.

“Interestingly as well, somebody turned in a gun with a sequential serial number, that tells me, it is a police issued firearm.”