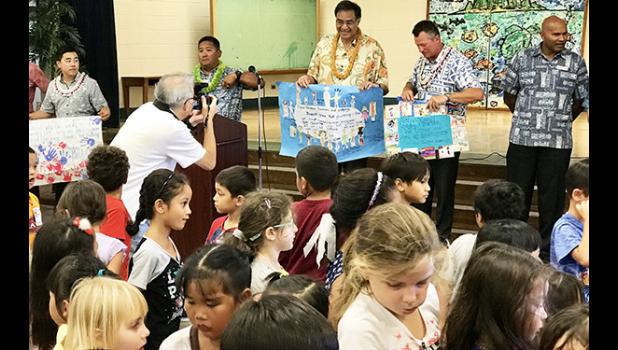 Completion of this volunteer effort, dubbed “Project Cool,” was marked by a ceremony held at Jefferson School on Monday afternoon, October 17.

HLTA President and CEO Mufi Hannemann said, “We kicked off Project Cool many months ago when the Department of Education was pressing the Legislature to fund air-conditioning for overheated schools. It took a while for us to receive the necessary approvals, but once we did, we moved very quickly to purchase and install the air-conditioners, thanks to our HLTA Engineers Council and Principal Garret Zakahi of Jefferson Elementary.”

Project Cool was an HLTA partnership with Charity Buy Line, a beneficiary of the HLTA’s Charity Walk last year. The money was used to buy and retrofit 32 air-conditioning units for classrooms that had broken or malfunctioning units. In Synergy Engineering was also instrumental to the project, assisting with the design and approval process.

In the first phase of project, HLTA volunteers led by Dennis Maher, head of the HLTA Engineers Council and Director of Facilities and Security at the Trump International Hotel Waikiki, installed four units in two classrooms. Then, on Saturday, August 27, more than 20 volunteers from HLTA member-hotels and businesses removed the old units and installed 28 more new units in several classroom buildings. The final phase was the installation of fans, which was completed on October 1.

“We’re honored to give back to the Waikiki community and provide a more conducive classroom environment for our keiki. With summer temperatures at all-time highs, we recognized the need for these AC units, which directly impact students’ ability to learn and thrive in school,” said Maher.

The HLTA Engineers Council is a professional group of engineers, maintenance personnel, and trades and crafts workers who are employed at member hotels and allied businesses.

Before Project Cool, classrooms in Jefferson Elementary School had reached highs of 87 degrees, so the students were very grateful to learn about HLTA’s generous contribution. When the volunteers arrived on August 27, they found many colorful thank-you notes from grateful students.

“Jefferson Elementary School would like to thank Mufi Hannemann and our partners from the Hawai‘i Lodging & Tourism Association for their contributions of air-conditioning units and for taking time out from their busy weekend schedules to install the air-conditioning units and air intake fans in 16 of our classrooms. Thanks to our partnership with HLTA, we are now able to control the temperatures within our classrooms,” said Principal Zakahi.

Said Hannemann, "Project Cool enabled our visitor industry to collaborate with Jefferson Elementary to bring about a better learning environment for our youth and educators. We are so grateful to all of our members, especially our Engineers Advisory Council, for their time and kokua with this project, and it’s so heartwarming to feel the gratitude and aloha of the Jefferson ohana in appreciation for the work we did.”

The Hawai‘i Lodging & Tourism Association is a non-profit, statewide trade organization of lodging properties, lodging owners and management companies, suppliers, and related firms and individuals. It was founded in 1947 and is now the state’s largest private sector tourism organization. Today, HLTA consists of 700 members representing the state’s leading industry, 166 of which are lodging properties comprising almost 50,000 rooms. The HLTA is a partner state affiliate of the American Hotel & Lodging Association, the largest organization of its kind in the world