Man who survived gunshot at Salelologa tells of lucky escape 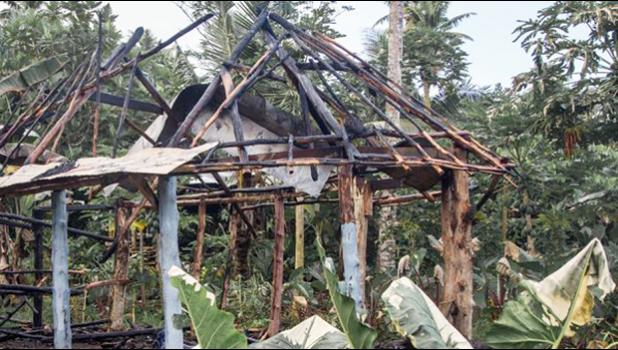 Salelologa, SAMOA — Moananu Mafua Romeo of Salelologa is grateful to be alive.

A teacher by profession, Moananu is counting his lucky stars after he was shot at early Sunday morning.

He was caught in the crossfire when young men from Salelologa set up rocks to block the road.

“I am fortunate to be alive and for that I am thankful to God for giving me another chance at life,” he said.

According to Moananu, during the wee hours of Sunday when gunshots were heard, that’s when men between Salelavau and Salelologa started throwing rocks at each other.

“I heard the gun shots, then I walked over,” he said. “At that time, rocks were flying back and forth and there were a lot of men on both sides of the road."

“Next thing, a gun was discharged and I was injured."

“I fell to my knees and I felt like someone just slapped me, telling me I was just being shot."

“I was able to get back up and felt pain on the back part of my body, from my back all the way down."

“Luckily the gun was discharged from afar, and the pallets from the ammo were splattered onto my back and legs."

“I was able to get up and while limping to my house, which was not far, I saw our Church Minister walking towards the young men and I had to warn him."

Radio New Zealand reports from police in Samoa are that the two suspects handed over to police by Salelavalu village matais have been charged with grevious bodily harm.

The pair are in police custody in Apia to await  their court appearance in two weeks' time.

But the police spokesperson, Auapa'au Logoitino Filipo, said the Salelologa village council was meeting to discuss the possible handing over of several suspects who are alleged to have caused damage to small business vendors at Salelologa market Monday morning.

Meanwhile the police said the two suspects in custody who are aged 21 and 36, are also being investigated in relation to a video posted on social media showing a youth from nearby Saletagaloa with a shotgun pointed at his head.